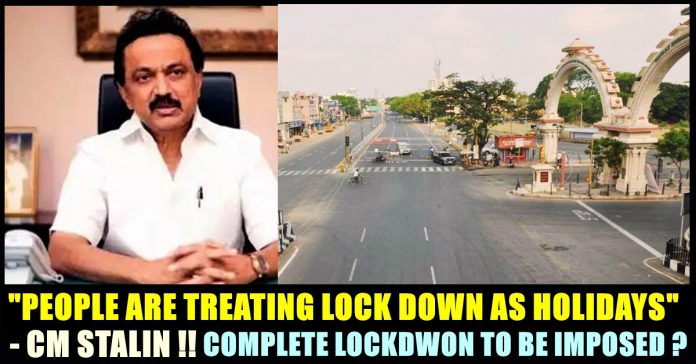 After the meeting with the committee of health experts and the members of the legislature of 13 other political parties which includes the members ADMK, Congress, Chief Minister MK Stalin has said that there is a situation in Tamil Nadu where a complete curfew has to be observed. During his speech, Stalin said that the department of medicine has been subjected to an intense mental pressure, according to News 7.

MK Stalin, reportedly said that people are roaming around, treating the lockdown situation as holidays which led the virus to spread wider. “To prevent the spread of the virus, a situation to impose the complete lockdown without relaxations has been created.” Stalin said. Members of the health exprets committee has suggested him the same, says the reports. “The same view has been conveyed to me during my visits to districts during the past two days,” The chief minister added.

“We have lost many lives since the Corona infection started. Many frontline staff including doctors have succumbed to the virus. We have to put a stop to this.” Stalin said in the meeting. “On the request of Tamil Nadu government, the Union government has increased oxygen allocation upto 519 metric tonnes. Besides, 100 metric tonnes of oxygen is being received from Odisha. Oxygen is being procured by air and train services too.” Stalin said.

“Tamil Nadu government has held talks with the Maharashtra government for getting 900 metric tonnes of oxygen. An IAS officer is stationed at Maharashtra to ensure this supply.” The Chief minister said and it has been reported that steps are being taken to procure 2,180 oxygen cylinders from Singapore and the efforts to procure Oxygen from countries like South Korea and other countries are being mad, according to reports.

To prevent the surging positive cases of COVID 19 virus in the state, Tamil nadu government has imposed a full lockdown from 10th of May to 24. The order was issued a day after the state recorded its biggest day spike of over 26,000 new COVID infections. The newly elected Chief Minister MK Stalin said that the lockdown was being enforced due to “unavoidable reasons” in his statement.

The decision, Mr Stalin added, was taken based on inputs received at a review meeting he had with district collectors on Friday, besides consultations with medical experts. Now, as the imposed lockdown is nearing its end, the statements of the Chief minister hints that the state has decided to extend the lockdown without relaxations for coming days to prevent the spread of the virus.

Previous articleHashtag “Crocodile Tears” Trending At Top In Twitter !! You Know Why
Next articleEverything You Need To Know About The Complete Lockdown !! Details Here :

Tamil nadu BJP leader Annamalai, on 8th of March, came up a post in his official Twitter handle, conveying his wishes for women's day....

A Team of 10 Income Tax officers have raided the residence of South Indian actress actress Rashmika Mandanna on the 16th of January. Rashmika...