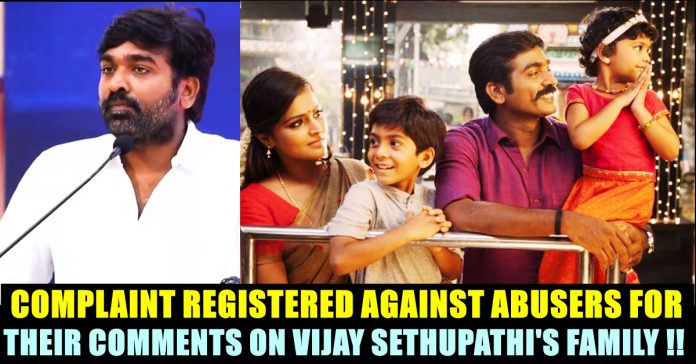 Vijay Sethupathi became a subject to online harassment after one of his older video went viral in social media. A particular set of people started abusing the actor’s family for a video clipping in which he shared an old joke of Late Crazy Mohan. The abusers are firmly believing that Vijay hurted sentiments of Hindu religion and made fun of their rituals.

Days ago, Amar Prasad Reddy, media advisor of Union Minister of State for Health and Family Welfare and BJP supporter has came up with a video clipping of actor Vijay Sethupathi from a show named as “Namma Ooru Hero” telecasted in Sun Television. In the video we can see Vijay Sethupathi referring a joke of Late crazy Mohan regarding anointments to Hindu gods.

In the video shared by Amar, Vijay Sethupathi can be seen saying “They will usually show the anointment ceremony to the devotees in a Temple. After completing the process, they closed it with a screen. When a child asked his grandfather why they are closing it with screen now. He said that they are going to change clothes to God as he just took bath. For that, the child asked, they showed how God took bath but closed while changing clothes?” which made the entire hall to erupt in laughter.

Sharing this particular video clip, Amar Prasad said that he feels that the statement made by Vijay Sethupathi as highly derogatory. He also threatened to expose the secret life after 10 : 30 in his tweet. “Vijay Sethupathi and other cine actors in Tamil Nadu, such statements about #HinduGods are intolerable and highly derogatory. If this continues we are ready to expose your secret life after 10.30 to public.” he wrote in his tweet by tagging H.Raja, Pon Radhakrishnan, Hindu Munnani Nellai, Official Twitter page of BJP party and actress Lakshmi ramakrishnan.

Followed by this tweet, many people started abusing the actor in a cheap way. Some dragged the family members of the actor and made cheapest comments result of which All India Vijay Sethupathi fans club secretary Kumaran filed police complaint seeking removal of defamatory statements against the actor and his family.

In his complaint letter, Kumaran said that opinions of people may differ but one should not be attacked personally. “Freedom of speech is not about abusing one’s family. Derogatory statements against Vijay Sethupathi and his family should be removed immediately” his complaint read. He also seeked the removal of the video which caused this controversy and asked police officers to take action on stopping this kind of abuses taking place in future.

Even since the speech of Vijay Sethupathi in “Master” audio launch surfaced, he has been facing the wrath of religious people who belong to Hindu community. In his speech, The actor directly slammed the so called godmen by asking people not to believe them. “We should understand that the only things that exists is humanity. No super power will come from sky to save us” he said during his speech. “It is humans who are living on earth, not God. Only a human could save his fellow human. This is a place which is made for humans and we should live by sharing love towards each other” he said during his speech which made the believers of God angry.

Actor @VijaySethuOffl 's Fans Club association @kumaran4567 files police complaint seeking removal of defamatory statements being made against the actor and his family. Here's a copy of the complaint submitted to the Cyber Crime Dept:#WeSupportVijaySethupathi@proyuvraaj pic.twitter.com/0JOOTJJ092

So many social media users came in to suppoer the actor in this issue :