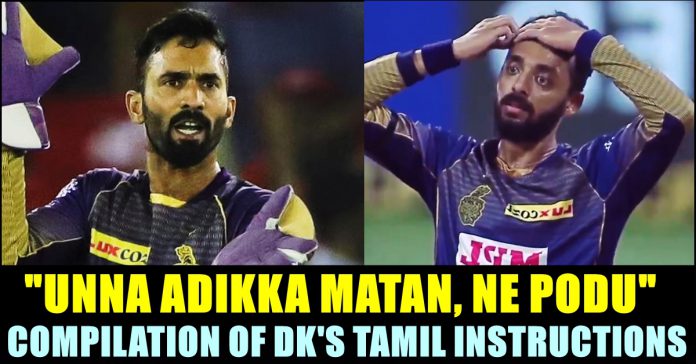 Despite of CSK’s poor form, Tamil nadu fans of IPL tournament are pretty much happy on realizing the fact that the players of the state are shining for other IPL teams. Starting from legendary Ravichandran Ashwin, ICC player of year 2016 to uncapped players such as Natarajan and Varun Chakravarty, a sum of Tamil nadu based players are proving themselves in this ongoing tournament.

Dinesh Karthik led Kolkata Knight riders are the front runners to reach play offs whereas Sunrisers Hyderabad’s Natarajan bowled more number of yorkers than Jasprit Bumrah. Murugan Ashwin doing his job for Kings 11 Punjab who just made their come back in the race for playoffs. Delhi capitals making a good use of Ravichandran Ashwin’s economic bowling and Varun Chakravarty made his face recognised among the selectors and audience as well.

With the excellent performances of these players, what excited Tamil fans the more is, the way Dinesh Karthik instructing his teammate Varun Chakravarty in Tamil language to keep it themselves without letting the batsmen know about their game plans and strategies. Instead of discussing with him ball to ball by walking through the pitch, Dinesh decided to go with this way. The stump mic which was kept to record the rattle of stumps for the Television audience, recorded Dinesh Karthik’s chatter too.

From instructing Varun on where to bowl the ball to criticizing him for bowling a bad delivery, everything was recorded only to make the Tamil audience go gaga over it. On fans capturing the moments and uploading it in social media platforms, Star Sports network came forward and made a compilation for their followers.

“Ithu Thaan Ithu Thaan vechiko, Usharu Usharu, Konjam ulla varlam paravala” says Dinesh to Varun in a certain occasion which means “This is it, This is it, keep it there, Be careful, it is ok bowl a little bit inside now”. “Nalla irunthuthu, ithu than ithu thaan ithu thaan length-uh nyabagam vechiko” Karthick says which means “It was good, This is the length, keep it in mind”. He said it when Varun bowled it between slot and yorker length with a little bit of turn towards the stumps. When Hardik Pandya was batting Karthik can be heard saying “Unna adikamatan Unna adika maatan, ne podu” (He won’t hit you, you bowl).

“Enga podra ulla vei” suggests Dinesh to make Varun bowl onto the stumps which gains their team a wicket in the very next ball. During the batting of RCB, when Aaron Finch and Kohli were discussing something between the over, Karthik says “Podu Thairyama podu, unna adikka venam nu sollirkaan, ne podu” which is roughly translated as “He asked him not to hit you, you bowl bravely”. “Avan apdi yosikran ne ipdi yosikra, podu” (He is thinking that way, you are thinking this way, just get him out) he adds.

Here’s the videos missed out by Star sports Tamil :

This is not the first time Dinesh using the language to interact with his teammates. During International matches, while playing with Tamil nadu players like Ashwin, Dinesh made the headlines for giving him suggestions and appreciations in Tamil. Not only Karthik, even Dhoni and other Indian wicket keepers would use their respective regional languages to prevent their foreign opponents understanding their game strategies.

Previous articleVanitha Vijayakumar Broke Up With Peter Paul !! WATCH
Next articleRajasthan Royals Proudly Shared The Number Of Dot Balls They Bowled Against CSK !!

Even as Kerala continues to be battered by the worst floods the state has faced in nine decades, companies and individuals have come together...