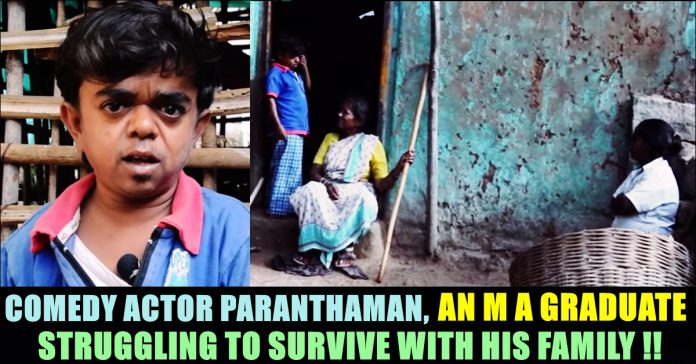 Comedy actor Paranthaman who appeared in many films and serials in supporting role seeking government’s help to survive through this critical situation in lockdown. Due to the lockdown crisis, many people from various industries are financially affected and the workers of it are suffering in big time. In a way of helping the people of their field, many of the stars from film industry are coming forward to contribute their part.

Earlier, actor Karthick who is popularly known as “Theepetti” Ganesh in film industry, tried hard to reach actor Ajith Kumar, to get some financial help from him to save his family amidst this lockdown crisis. Now, actor Paramanthaman who went to his hometown due to the shut down of film industry, struggling to earn money for his family to survive which consists of a mentally challenged father, an aging mother and a brother who is pursuing his under graduation in Arts. Parandhaman completed his post graduation in MA. Paranthaman and his family belongs to a village named as Sivalingapuram which located near Hosur.

“I was working in Chennai as a comedian in a private channel. I have made other people laugh through my acting but my family doesn’t know what happiness is.” says Paranthaman to a media channel. “We are still expecting that happiness to spread in our house too. We don’t have a proper house. In our family, three of us are physically challenged” says Paranthaman. Sagadevan, younger brother of Paranthaman is also a person with dwarfism. “All we want is to live on our own. We don’t want to beg others for a living. We want to survive only through our hard work” the actor said. “I expect our government or any private company or Non government organisation to help us by providing a permanent job” he added.

This video of Paranthaman is doing rounds in the social media platforms for past few days and the actor is expected to receive what he deserves soon.

Tamil Rockers Leaked The Yet To Be Released Avengers ENDGAME !! Here’s How Internet Reacting !!

The much-awaited Avengers: Endgame has become the latest victim of piracy. According to reports, infamous piracy website TamilRockers has leaked a cam print of...