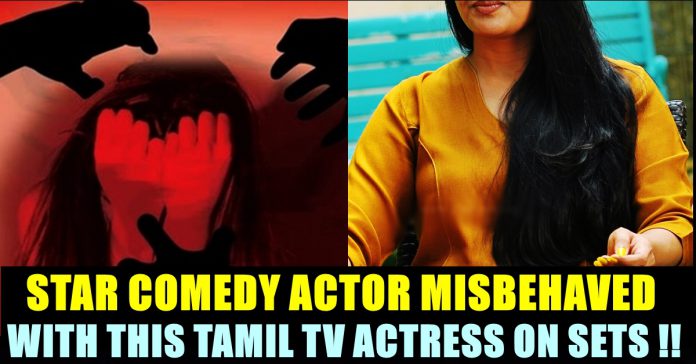 We have seen many heroines coming up with allegations against men who misbehaved with them during the process of filmmaking. The latest one to join the list is actress is Veteran actress Pragathi who got introduced to Tamil industry through Bhagyaraj’s 1994 film “Veetla Viseshanga” as heroine. After her debut, the actress went on act in several movies in Tamil, Telugu and Malayalam languages. Some of her notable works in Tamil film industry are Periya Marudhu with Vijayakanth, Summa Irunga Machan with Pandiyarajan. She also acted as protagonist’s mother in Udhayanithi’s Geththu, Sasi Kumar’s Thaarai Thappattai and Santhanam’s Inimey Ippadithaan.

Currently she is busy acting in “Aranmanai Kili” serial as a character artist which is being telecasted in Vijay Television. Recently one of a video she uploaded in her official Instagram account went extremely viral across the social media platforms as she performed for Thalapthy Vijay’s Vaathi Coming along with her son Manish in that video.

Talking about the video, Pragathi told media that she never expected it to go viral. The 44 year old actress said that she practiced 15 minutes before performing the video. Now the actress, in a recent interaction with a Telugu media channel has revealed how a star comedy actor misbehaved with her in film set. The actress who opened up while answering to one of a question of the journalist, didn’t want to expose the Telugu cinema’s comedy actor’s name.

Recalling the incident, Pragathi said that he was very nice to her all through the years. One that day she felt uncomfortable with the behaviour of the actor who acted a bit weird. The actress said that the incident happened around 11 am in the morning. She who couldn’t bear the cheap double meaning talk and dirty behaviour of the actor, waited for the shoot to wrap and confronted him in private.

“I met him in the caravan privately and asked him whether I did any gestures that made him to behave that way. I also asked him whether any of my body language invited him to approach me. When he said no, I told him what he did in the sets was completely unacceptable. I told him it was very cheap and expressed my discomfort with his behaviour.” the actress said who added that she made him realize that she could have confronted him in the sets in front of everyone but waited to talk to him privately keeping his image and societal status in mind. This revelation from the actress made the people belong to Cinema industry to raise their eyebrows wondering who could be the senior comedian.

“One Rule For BJP, Other For All Other Parties?” TN FM PTR On The Freebies Debate!!

Regarding the ongoing debate on freebies, Tamil nadu's finance minister Palanivel Thiagarajan, on Monday, came up with a series of pictures that shows BJP...

Popular television star Pugazh got married to his long time girlfriend Bensiya recently and grabbed the headlines. Many celebrities from television and cinema industry...

Yuvan Shankar Raja is one of the most influential music directors of Kollywood film industry. He who enjoys a fan base on par with...

Krunal Pandya & SKY Said That They Think About Pollard While Thinking About CSK !! Got Trolled After The Match Result

Post the result of the second match between Mumbai Indians and Chennai Super Kings in the ongoing IPL tournament, Krunal Pandiya and Surya Kumar...