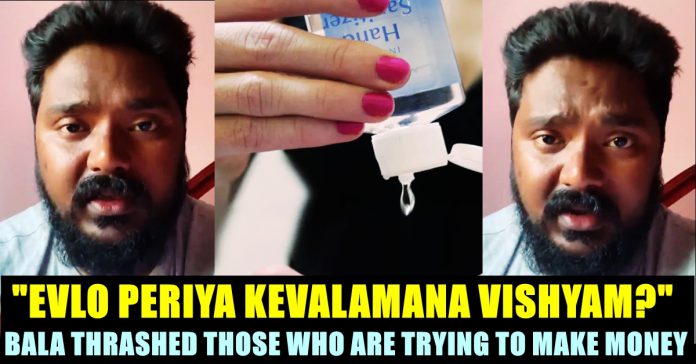 For trying to earn money by utilizing this crucial situation, comedy actor Bala Saravanan who is known for acting in films like “Pannayaarum Pathminiyum”, “Darling”, “Thirudan Police”, lashed out at merchandisers through his official twitter account. The video showed himself sharing a couple of incidents he faced in recent times.

Due to the Corona crisis, the entire country is trying to be safe and precautionary. The deadly virus killed more than 11,000 people across the world and more than two and half lakh confirmed cases has been reported across 186 countries around the world. World Health Organisation insists the people across the world to wash hands frequently and to stay home for few days to prevent it from spreading. They are also demanding people to wear safety masks while going out for emergencies. Tamilnadu government announced shut down for every places which requires public gatherings including Theatres, Malls, Amusement parks, Zoos.

Now, using this situation, the sellers of hand sanitizers and safety masks are trying to earn more money it seems. In the selfie video shared by Bala Saravanan, the actor can be seen saying that humans are more vicious comparing to the virus which is killing people. He explained a couple of incidents where he was forced to buy hand sanitizers for double the rate the MRP shows.

“Three days before I went to a shop to buy sanitizer. They demanded Rs. 135 from me for a sanitizer which is worth Rs.60. When I asked the one who is collecting the cash about the MRP rate, he said that he is just a worker there and said that he couldn’t do anything about it. I left the place” said Bala who went to add another incident which he faced in a Coffee house.

“Later I went with my friends to a coffee house. A sister who makes coffee there dropped the sanitizer in our hands to make us clean our hands. She did it by lamenting about the way she got compelled to pay more money to buy the sanitizer. She said that she got the sanitizer for Rs.115, actual price of which is just Rs. 75. She even complained that they are not ready to provide bill as well. That is when we came to know that every of us were forced to buy sanitizer for more money. It evidently made us realize that shops increased the rate by knowing about the demand” he said.

“Making use of this kind of situation for their profit, is the cheapest thing ever. I am honestly saying that humans are more dangerous than Corona. This is the time one should sell the basic requirements for discount rate. High profile companies should step forward to help people at this situation. But using this situation is extremely dangerous. That sister said that she couldn’t buy one for her own house as there is no sanitizer for below 80 Rs. There will be no reformation in this society forever” said Bala who looked very much dejected.

Comment your views on organisations trying to make money out of this situation and Bala’s opinion about it !!