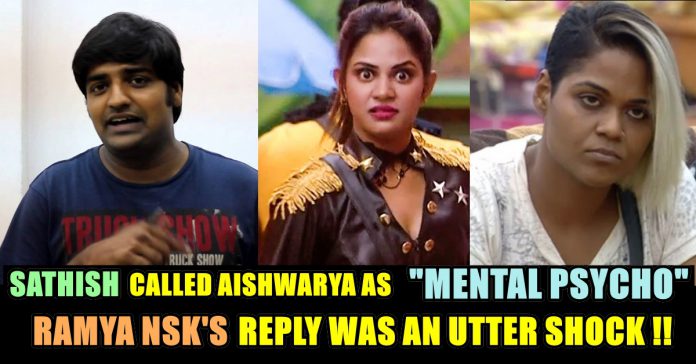 In Wednesday’s episode of Bigg Boss Tamil, Aishwarya continued to rule as the queen. She continued to give out tasks to the housemates, but nothing was as bad as her dumping trash on Balaji, who protested the punishment he received by starving himself. Mumtaz continued to be upset with Aishwarya over the punishment, but she performed the tasks that were given to her. Aishwarya, Daniel and Janani sat down and discussed how to make Balaji have food. Aishwarya told Mahat to force-feed Balaji and when he did that, Balaji spat the food on the floor. After lights out, housemates are supposed to go to bed according the rules set by the queen. But Balaji, who didn’t know the rule, sat on the couch and refused to leave till he felt like it.

Later, Aishwarya and Janani discussed what happened through the day, and Aishwarya explained that Balaji spoke ill of her mother and that’s why she reacted. The ‘queen’ had said that the people can only eat and drink what she permitted them to do so. After she had her meal, Senrayan made tea for himself, which Aishwarya poured in the sink. Soon, a huge argument followed, with Aishwarya punishing him and ordering that he would have to starve the whole day. Senrayan is the one who abused Aishwarya first, but when she countered, he raised his hand. He did not slap her, but he yelled at her and didn’t follow the rules.

Aishwarya continued to punish him and Senrayan said that he wanted to pack up and leave the house. The housemates did not understand what dictatorship meant. Even when Janani tried to explain the concept Senrayan spoke about how he was from a poor family. He also spoke about how Aishwarya doesn’t give respect to age, and asked why she wanted him to address elder people as ‘loosu’ (mental). He, however forgot that he was the one who began it by calling Aishwarya names in the first place. which means mentally sick psycho… Waiting for Ponnambalam brother to slap her tightly.. bye to “loose(mental)varya”

For his tweet Ramya NSK, the eliminated contestant responded. Ramya NSK, who stood by Aishwarya when Ponnambalam used offensive comments against her in Bigg Boss Tamil 2, is not impressed with her conduct after turning dictator in the latest task. She replied actor Sathish by writing “I am so upset watching all that she did!”

I am so upset watching all that she did!

She earlier wrote about the Aishwarya’s activity in her personal account as well.

Watching this task really affected me! I am really upset with the way Aishwarya is treating people in the house. All for what? A task? I think all of you would have seen me angry if I was still a part of BB! #BiggBoss2 #BiggBossTamilSeason2 #BigBossTamil2 #BiggBoss2Tamil

For this Ramya apologized to the follower.

What do you think on these opinions of known personalities ?? comment below !!

Previous article“I Was About To Knock Bigg Boss House At That Night” Nithya Opens On Aishwarya’s Activity Against Balaji !!
Next articleRithvika Accidentally Revealed That They Are Getting “Paid” By BIGG BOSS !! Caught On Video !!