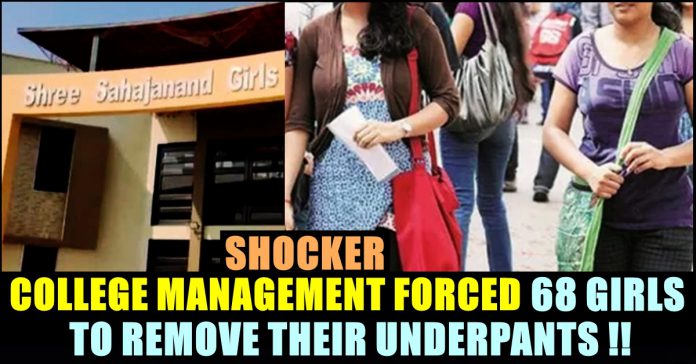 In a college named as “Shree Sahajanand Girls Institute”, 68 girl students were forced to remove their underpants in order to confirm the college authorities that they are not menstruating. The college which is located in Bhuj town of Gujarat’s Kutch district has suspended its principal Rita Raninga, hostel rector Ramilaben and peon Naina after police registered a First Information Report against them.

A woman named as Anita who has no association with the college management was also named as an accused by the police officers of Bhuj town. The four accused has been booked under IPC sections 384 (extortion), 355 ( assault with intent to dishonour the person) and 506 ( Criminal intimidation).

The college institute which has its own hostel is a self financed educational centre. A trust of the Swaminarayan temple in Bhuj town is running the college. The college is affiliated to the Krantiguru Shyamji Krishna Verma Kutch University. The hostel authorities involved in such disgustful act to find if any student had broken the college rule. The rule says that a student who is having her period should not take meal with other hostel inmates.

The incident was took place on the 11th of February. On Sunday, a seven member team of the National commission for Women met the girl inmates of the college hostel, who were forced by the college authorities to remove their innerwears to check if they were menstruating. “An education institution works for social transformation. This transformation requires a change in the dogmatic tradition. But if such incident takes place in 21st century, then this is definitely a matter of shame and disgrace” said Rajulben Desai, a NCW member and former principal of a law college. She said it to the media after meeting the victims.

She further said that they will come to know about the whole thing only after proper investigation. But she added that the members of NCW got shocked to find that majority of girl students agreed to this practice being followed in the name of religion. She even said that the girls are being ordered on how to eat and sleep during the menstruation days. “We object to this” she added who added that the girls who are having their periods are not supposed to eat meals along with other hostel mates.

“The hostel authorities maintaining a register on menstruating students. The management has a lot to answer. The matter will be probed within two days” Desai assured. A Police official said that a Special investigation team has been formed with women officers as its members, to investigate the case.