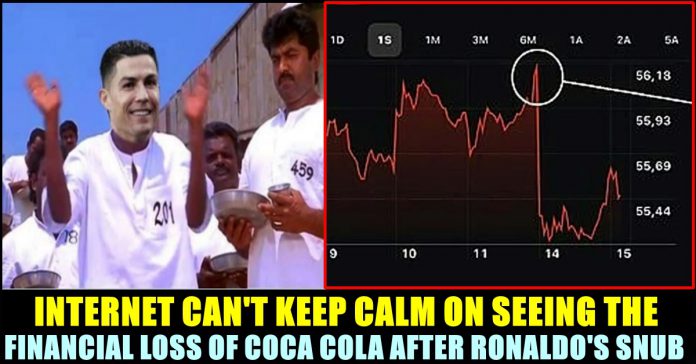 The brand Coca cola faced a financial loss of USD 4 billion which is equal to Rs. 29,333 crore after Footballer Cristiano Ronaldo moved a couple of Coca Cola bottles away from the camera and gestured people to drink water instead. It is reported that Coca-Cola’s stock price dropped 1.6 % after the gesture of Ronaldo. The Daily star has reported that the worth of the company was dropped from USD 242 billion to USB 238 billion in one day.

As we all know, the world famous football played Cristiano Ronaldo is a fitness freak and has inspired millions of people around the world to be fit. The 36 year old has been giving “goals” to people of his age to look younger like him. His young looks got acknowledged by several people including media, fans even his fellow footballers. Now, a gesture of the global icon at the Portugal’s press conference has grabbed the attention of the Internet users. He removed the Coca cola bottles which were placed in front of him and gestured public to “Drink Water” by showing a water bottle.

He appeared in the press conference with Coach Fernando Santos. After arriving to attend the press conference, Ronaldo who saw two Coca Cola bottles placed in front of him, removed them and placed it away so that it couldn’t get captured with him in camera. Further, the man who enjoys a huge fan base across the world, lifted a water bottle and suggested people to “Drink Water”. He literally said “Be with water” in Portuguese. His gesture surprised many including his coach who was sitting beside him.

Now, as soon as the reports on the financial loss of Coca Cola surfaced, users of social media platform can’t keep calm as trolls, memes and reactions are flooding the feeds. Hashtag “Coca Cola” is trending in Twitter with various kind of reactions as well. Check out some of them below :

I chose to drink water from the fridge instead of coca-cola after that CR7 presser. 😅 #CocaCola #CR7

Previous articleBlack Sheep In Trouble For Honouring “Toxic” Madan With An Award ?? WATCH
Next articleBJP Kalyan Wants No Woman To Become Priest Because Of This Reason !!