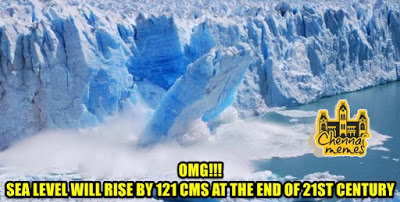 Global sea levels rose faster in the 20th century than at any time in the previous 2,700 years, research has shown.Without the global warming , sea levels might actually have fallen in the last 100 years, scientists believe.
Instead they are said to have increased by an average 14 centimetres (5.5in) between 1900 and 2000.Without a rapid reduction in greenhouse gas emissions, worldwide sea levels are on course to rise by between one and four feet by the end of this century, it is claimed.
Even if the ambitious goals of the 2015 Paris Agreement to manage climate change are adopted, sea levels are still projected to rise by as much as two feet.
“If the world wants to avoid the greatest losses and damages, it now has to rapidly follow the path laid out by the UN climate summit in Paris a few weeks ago.”
More than 600 million people live in vulnerable coastal areas less than 10 metres (32 feet) above sea level. Two thirds of cities with populations of more than five million are located in these high-risk areas.
The US Environmental Protection Agency estimates that 26,000 square kilometres (10,000 square miles) of land would be lost if global sea levels rise by two feet.