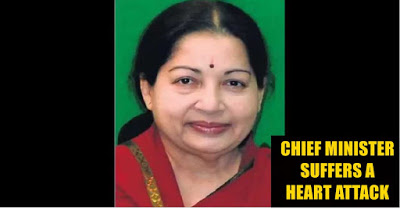 Yes. It’s true.The Tamil Nadu Cheif Minister who had been recovering from a fatal lung infection has suffered a heart attack.

A recent announcement by the Apollo Hospital stated that the Chief Minister had a heart attack around 9:30 on December 04,2016. She is being treated by Cardiologists and pulmonologist along with critical care specialists from various hospitals.

Vidyasagar Rao, the present governor of Tamil Nadu is rushing to see the Chief Minister after this news was announced.

The Chief Minister was supposedly losing her health from the evening and sadly ended up getting a heart attack around 9:30. She was admitted on september 22 to the Apollo Hospitals, Greams Road owing to repeated lung infection.

For Crying Too Much On Saravanan’s Eviction, Check How Sathish Trolled Sandy & Co !!

In the third season of Tamil Bigg Boss, Saravanan was terminated from the show for his derogatory comments about groping women in his earlier...