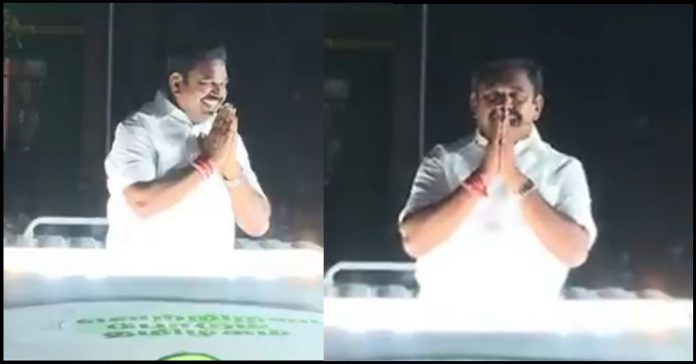 A video of chief minister Edappadi K Pazhaniswamy thanking a Vijay fan for expressed his support for his party is doing rounds in social media platforms. The video shows a voice from the crowd saying “We from Vijay Makkal Iyakkam are extending our support to you” and in return, Chief minister Edappadi K pazhaniswamy could be seen thanking him before making it as an announcement.

Chief minister Edappadi K Pazhaniswamy has been campaigning on behalf of his party across the state. He has been condemning the party of opposition for various reasons and seeking votes from the public to continue his governance. He also pretty much interactive with the public while delivering his campaign speeches.

Most recently, a video of the chief minister asking youths not to hurt a cow which intruded his campaign trended in social media platforms. Now, a video of himself thanking a Vijay fan who expressed his support to the EPS led party got surfaced.

“We from Vijay Makkal Iyakkam are extending our support to you” a voice emerged from the crowd while Chief minister Edappadi K Pazhaniswamy was campaigning. Replying to him, CM thanked him with folded hands and said “A friend from Vijay Rasigar Mandram (Vijay Fans Club) has expressed his support to us. Thanks to him, on behalf of everyone” amidst the loud cheer of the public.

The elections for 234-member assembly will be held in single phase. The counting of votes will take place on May 2. All elections in 38 districts of Tamil Nadu consisting of 234 Assembly Constituencies will be held in single phase. A total of 6.26 crore people including 3.18 crore women, 3.08 men and over 7,200 persons from the third gender are going to vote in the assembly election, says reports.

Not Vijay Or Vijay Sethupathi , This Man Steal The Show !!

The most awaited audio launch of Vijay's sixty fourth film "Master" took place yesterday and it got telecasted in Sun TV. The function involved...

Pawan Kalyan's most awaited "Vakkeel Saab" movie released in theatres on 9th of April and is making headlines since then. The film which is...