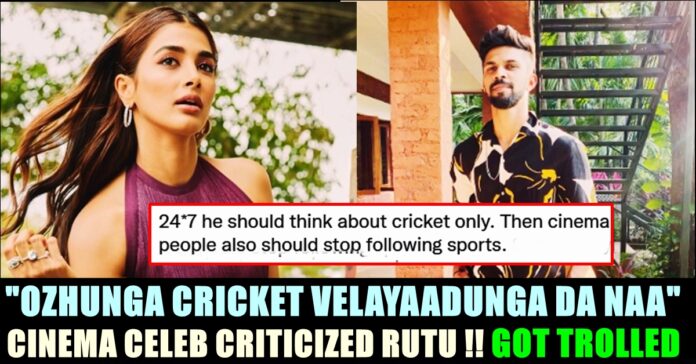 Tamil cinema editor T. S Suresh who worked in films such as “Tamizh Padam”, “Irumbu Kuthirai”, “Dagaalty” is in the receiving end for a tweet he posted criticizing CSK opener Ruturaj Gaikwad for “liking” a picture of actress Pooja Hegde through twitter.

The film editor who is pretty much active in the micro blogging social media site, is pretty much vocal about sports and entertainment through his twitter handle. Though he uploaded the tweet in a light manner, reach of his tweet changed the context of his tweet as a result of which many found it offensive and judgmental.

Star Chennai Super Kings Player Ruturaj Gaikwad who is yet to provide a significant innings in the ongoing IPL edition, grabbed the attention of Twitter users after “liking” one of the recent posts of “Beast” actress Pooja Hegde. Team Chennai is in deep trouble after winning only one game after 4 consecutive losses and the opener’s online activity genuinely irked few fans and caused light hearted trolls among the others.

The 25 year old cricketer who won orange cap on behalf of Chennai Super Kings in last season after scoring 635 runs in 16 matches, is struggling to get a good start in the ongoing IPL season. The right hand batsman didn’t surpass single digit score in the last 4 matches he played.

However, Ruturaj who is not pretty much active in social media platforms, especially in the micro blogging social media site, dropped a “like” for one of the recent posts of south Indian actress Pooja Hegde. In the five posts he liked from his twitter handle which was started during August 2020, the Pooja Hegde’s was the only non-cricket post.

In the post, actress Pooja Hegde who was last seen with Prabhas in his highly anticipated “Radhe Shyam” and is about to appear with Thalapathy Vijay in “Beast”, was seen posing for pictures by wearing a cute frock.  “Denim dreams ☺️” read the caption of the actress’s post.

The post garnered 65 k likes so far with hundreds of reactions from her fans and followers. However, the like dropped by Ruturaj grabbed the attention of CSK fans who came up with tweets slamming the youngster for not concentrating in his game while the team is in the bottom of the table.

Here’s the screenshot of Rutu’s “likes” portion of his profile : 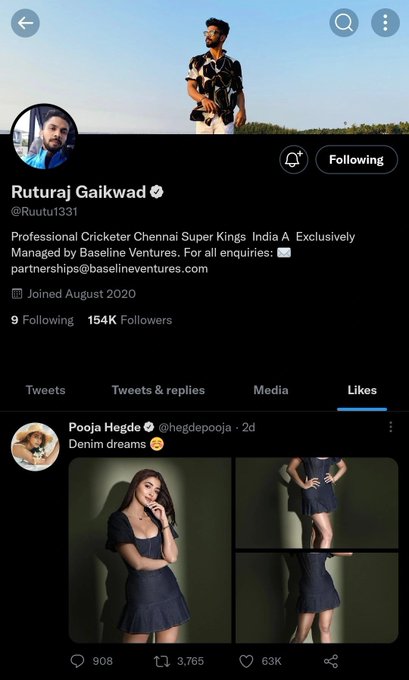 Among the many who trolled Ruthu for his online activity, editor Suresh came up with a tweet writing “Ozhunga cricket velayaadunga da na..!” and criticized Ruthu for “liking” the actress’s post.

Many users of twitter confronted the tweet of Suresh asking whether cricketer should only think about the game all the time. Few even came up with the screenshots of the editor “liking” the posts of some of the heroines.

24*7 he should think about cricket only. Then cinema people also should stop following sports. Should only watch movies and take movies

What is so unsual in a cricketer (basically a human too) liking a tweet with actress picture on it? What does it have to be linked to his professional performances? Why are such baseless criticism being done? 🤦🏻‍♂️

I don’t understand, cricketers should just be machines to entertain others lol. https://t.co/R4bvwVBHMt

A moment of leisure outside work/career is a fundamental right even If it’s for a celebrity sportsperson https://t.co/ztEOrp39DU

Is a cricketer not supposed to use twitter or like a picture? How would you react if someone had asked you to concentrate on editing instead of shit posting on Twitter? https://t.co/8xcleMxhoM

“Why Should I Take The Blame Of A Movie’s Failure?”- Official Video Of Ajith Released !!

A video interview of Tamil star Ajith KUmar which was shot during 1997 was released by Sun Tv's official youtube channel. The 10 minute...

Premgi Amaran who is known among tamil cinema audience for his appearance in his elder brother Venkat Prabhu's films, has composed music in number...