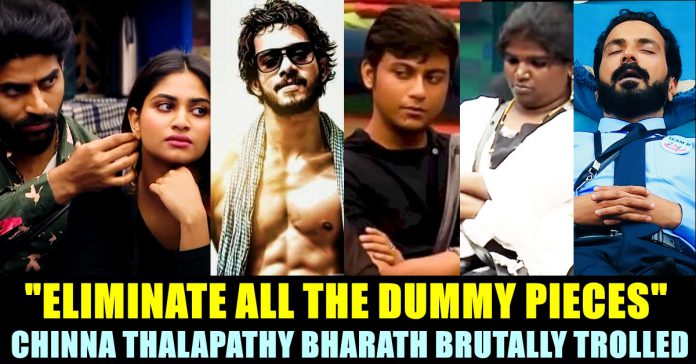 Tamil actor Bharath who is fondly called as “Chinna Thalapathi” by Kollywood fans, brutally trolled the contestants of Bigg Boss show. He posted a tweet terming them as “Dummy piece” and wanted all of them to get eliminated. The actor said that they are not providing content and tagged the official twitter account of Vijay Television. Comedy actor and Music director Premgi Amaren replied to the tweet of Bharath and asked whether he wants to go in with him.

As far as the ongoing Bigg Boss season is concerned, Rekha, Vel Murugan, Suresh Chakravarty, Suchithra and Samyuktha got eliminated from the show due to the less votes they received from the audience. Ajeedh got evicted and saved himself by using a pass he won during a task. Actor Bharath who identifies himself as a fan of Tamil Bigg boss, called out the contestants for the lack of interesting content.

“Can all the dummy pieces be eliminated from #BB4Tamil asap as I see no content from them !!” the actor wrote in his tweet with hashtags “#justsaying #fanofbigbosstamil”

Can all the dummy pieces be eliminated from #BB4Tamil asap as I see no content from them !! 😀@vijaytelevision #justsaying #fanofbigbosstamil

On seeing this tweet, Premgi Amaren, immediately replied by asking Bharath whether he wants to go in with him. “Bro shall we both go in ?” he asked and Bharath replied to him by writing “lol u want to bro?”

lol u want to bro?

Premgi replied back saying that he will go inside Bigg Boss house if Bharath accompanies him.

Meanwhile, Dance choreographer and supporting actor Sathish who has been following the Bigg boss show for a very long time, appreciated the gutsy tweet of Bharath.

Bharath debuted to Tamil film industry through Shankar’s “Boys” and gained widespread acclaim through “Kaadhal”, a tragedy love drama. He later appeared in hit films such as “Pattiyal”, “Pazhani”, “Em Magan”, “Kanden Kadhalai” etc. He was last seen in “Kalidas”, a cop thriller and is expected to appear in “8”, “Naduvan”, “Radhe” post lockdown.

Can we expect u for nx year or wild card entry this year to gve content.

You should come next season bro 🔥 #BiggBossTamil4