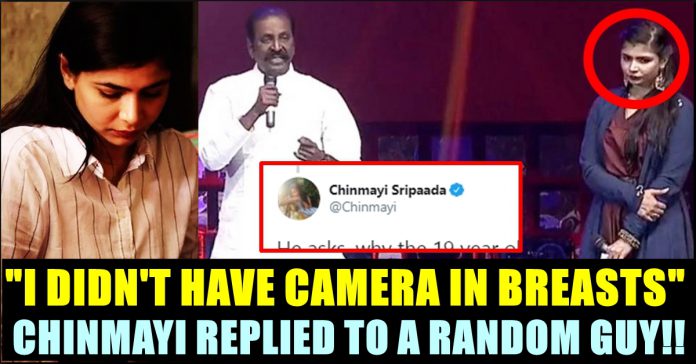 Famous Journalist Rangaraj Pandey made his acting debut through a high budget movie. He debuted in a movie which has Ajith Kumar in the lead and the movie was directed by one of the successful directors of Kollywood, H. Vinoth. As the movie is getting released today, Pandey have interviews to number of media houses. On seeing his interview to Cinema express about Nerkonda Parvai, in which he also talked about interviewing Chinmayi a year ago during #MeToo movement, Chinmayi has reacted on it in a furious way. During the interview, Rangaraj Pandey kept asking questions to Chinmayi, in a way of confronting her allegations against Vairamuthu.

Check out his recent interview here :

Chinmayi who saw this interview immediately responded to it through her twitter account. In her post she wrote “This interview with Mr Rangaraj Pandey.
From 22:00 Minutes. Mr Rangaraj Pandey’s interview was hands down, one of the most non-empathetic, cruel one that I have done during the MeToo movement. He continues to ask the same question, “Why so late?””

This interview with Mr Rangaraj Pandey.
From 22:00 Minutes.

Mr Rangaraj Pandey’s interview was hands down, one of the most non-empathetic, cruel one that I have done during the MeToo movement.

He continues to ask the same question, “Why so late?”https://t.co/wRBZHdFTWY She further justified why she opened about the issue 19 years later and how Vairamuthu was left unquestioned for her allegations against him. Check out the tweets that explained her state :

He asks, why the 19 year old me, the daughter of a divorcee with no man to count on, with the laws as of 2005, did not go and file a complaint against with the known DMK heavy weight, Mr Vairamuthu.

He also asks – Nothing happened to Mr Vairamuthu.
For that, I have only one thing to say.
No one in Tamilnadu has the spine to question Mr Vairamuthu, in ANY of the interviews about the total of 7+ allegations.
They have questioned Mr Radha Ravi, but RADIO Silence with Mr.V.

In a way of replying to her tweets, one of her follower asked her to provide any sort of evidence to prove her state. He also referred the incident of Radha Ravi who got punished because of his video evidence.

Hello @Chinmayi, unless providing any sort of evidence it will be hard to convince ppl. In Radharavi’s case his speech was video recorded and went viral in social media. There were many other victims who also complained against VM during #MeToo. If any of them..

..could publish any sort of evidence like Call recording, message screenshot etc., It will add major strength to the allegations. I’m sure then many men will come to stand with you. Otherwise it will be very difficult.

Sorry I didnt have a camera attached to my breasts or my butt. Thanks

Chinmayi is facing abuses and trolls since she started exposing the culprits who has sexually harassed girls. She started with Vairamuthu whom she accuses of sexual harassment in 2000. What do you think on these tweets of the singer ?? Comment your views below !!

Previous articleThis Popular Celebrity Slammed Abhirami For Proposing Kavin & Mugen !! SHOCKING !!
Next articleJUST IN : Venkat Prabhu Gets Emotional On “MAANAADU” Drop !! Check What He Has To say !!

BREAKING : Highway Roads & Routes That Are Blocked In Kerala Due To Floods !!

Torrential rainfall and landslides in different parts of Kerala have taken a huge toll on road connectivity in the state, stranding several people in different districts. Many...

“No Party Will Have The Power To Oppose AIADMK If We Win The Upcoming Election” – CM EPS To Party Workers !! WATCH

On Thursday, Chief minister Edappadi K Pazhaniswamy appealed the party workers of AIADMK to ensure the victory of AIADMK in the upcoming Tamil nadu...