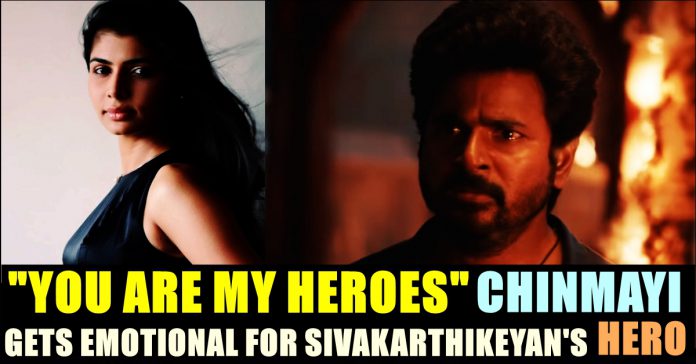 Sivakarthikeyan’s upcoming film Hero’s trailer released yesterday and is currently trending at number 1 in youtube. The two minute long trailer shows the protagonist Sivakarthikeyan as an aspiring super hero from childhood. It further indicates the film as a social thriller with some science fiction elements. Action king Arjun who utters some powerful dialogues is going to excel in the film in big time it seems. It is notable that his previous collaboration with director Mithran in Irumbu thirai worked out so well among the audience.

Produced by KJR studios, the film has Abhay Deol and Ivana in prominent roles. The female lead is going to be played by Kalyani Priyadarshan, who is making her debut Tamil film with “Hero”. The Central Board of Film Certification awarded a clear ‘U’ certificate to the film. As soon as the trailer released it reached 3 million youtube views.

To our surprise, the film also has popular singer Chinmayi as a voice artist after a long time. She is lending her voice for a female lead in dubbing after so many days. The singer and the representative of Metoo in South India was banned from dubbing by actor and leader of Dubbing union Mr. Radha Ravi.

The singer posted tweets regarding the same on 17th of November in 2018. (Also Read :Chinmayi Banned From Dubbing For Tamil Films !! Check Out The Reason) Check out the tweets posted by her on that day :

According to Tamil Film Industry rules if you’re not a member of the dubbing union they wont allow you to work. Considering no written communication, message was sent to me on past dues and with the membership terminated I wonder if I ll dub for a film again in Tamil.

This termination came as soon as she reported about Vairamuthu on sexual harassment in public. Now after one long year she got a chance to dub for a Tamil movie to thank which she wrote “After an uphill battle and after a year and some days – I dub in a Tamil film (Not counting Oh Baby’s dubbed version) I know how P S Mithran worked around with the Dubbing Union and Mr. Radha Ravi.Thank you, Mithran. You and the Producer are my heroes :)” in her twitter account.

I know how P S Mithran worked around with the Dubbing Union and Mr. Radha Ravi

Thank you, Mithran. You and the Producer are my heroes 🙂 @Psmithran https://t.co/vUpeQAVwGE

Followed by this tweet, she posted another one interacting with actress Kalyani to whom she lent her voice in the hero movie. She said “I do hope I have done justice to your work @kalyanipriyan Much, much love and thank you!!” to which Kalyani replied by saying “No one but you ♥️🤗”

Check out their conversation here :

What do you think on this brave decision made by the director of Hero movie ? Comment your views below !!

Meet The Only Person Who Drove Vehicle For Both Jayalalitha & Karunanithi During Their Last Rites !!

Nayanthara is one of the very few female actors who rules Tamil film industry for more than 15 years. Being the highest paid actresses...

Raid at Poes Garden: Mannargudi Mafia is in trouble?

Taxmen conducted a raid in former CM J. Jayalalitha’s residence at Poes Garden. This raid is said to be the continuation of the raid...