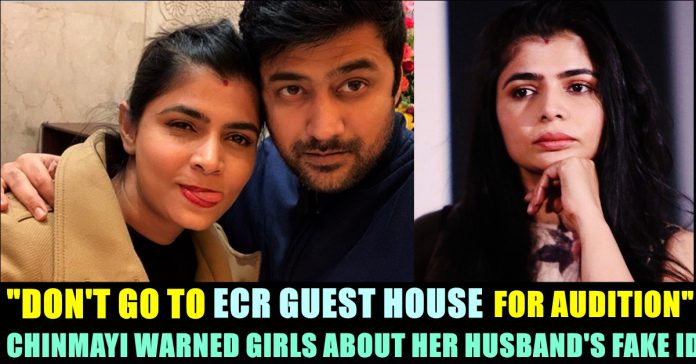 Chinmayi warned online users about the fake facebook account of her husband Rahul Ravindran. Chinmayi never spared her enemies in Social media platforms. Starting from Vairamuthu against whom she has been complaining about sexual harassment to a random guy who abuses her in Twitter, Chinmayi gave it back to almost every one of them instantly. Now she exposed a guy who is running a fake facebook account of her husband.

Here’s the screenshot of the fake profile :

Sharing the screenshot of his profile, Chinmayi said that her husband Rahul Ravindran complained about him in police station. The singer says that her deleted his account after Police warned him. Now the guy again created a fake account it seems. “Rahul and I have been tweeting about an imposter time and again. Rahul’s complained to the police. The police has warned him. He deletes his account on Facebook and then comes back. Please don’t fall for some ‘audition’ call in some random ECR guesthouse.” she wrote in her tweet.

Rahul and I have been tweeting about an imposter time and again. Rahul’s complained to the police. The police has warned him. He deletes his account on Facebook and then comes back.
Please don’t fall for some ‘audition’ call in some random ECR guesthouse. pic.twitter.com/wQcablvza1

Chinmayi got married to Rahul Ravindran on May 5, 2014. Rahul Ravindran debuted as hero in Tamil film industry and turned filmmaker in Telugu film industry. Apart from her dubbing works and singing works, Chinmayi is highly recognised by the Tamil cinema audience for her existence in social media. Her recent notable film as a voice artist was “96” in which she lend her voice for actress Trisha. She also lent voice for Kalyani Priyadharshan in Sivakarthikeyan’s “Hero” movie. Being a representative of South India for Me Too movement, Chinmayi is one of the very active celebrities who interacts with her followers often.

The couple is known for backing up each other in their hard times. On seeing his wife getting trolled for accusing Vairamuthu, Rahul once defended his wife by trolling them back. He said no trolls can stop him from supporting his wife who is looking for a change in the society.

What do you think on this move of Chinmayi to protect her husband from fake accounts !!

Zaheer Khan, one of the most experienced bowler of Indian cricket team, celebrated his 41st birthday yesterday. Wishes from all over the internet poured...