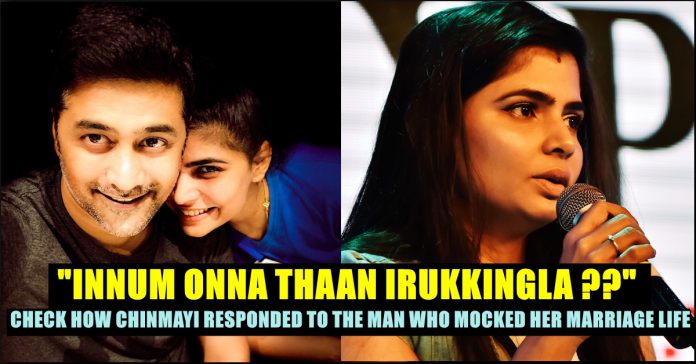 In a similar incitent, Chinmayi today uploaded a lovely picture with her husband Rahul Ravindran with a heart emoji.

Many adored the picture of Chinmayi-Rahul and wished them a very good luck for their future.


Among these adorable tweets, one follower spilled his venom in the comment section. The user who is came in a parody account said “இன்னும் ஒன்னாதான் இருக்கீங்களா?” ( You Guys Still Together?)

To this Chinmayi who got irked by his comment instantly gave him a reply. She aksed him to say his own bio to himself infront of the mirror. Check out her tweet here :

Here’s the screenshot of his bio : 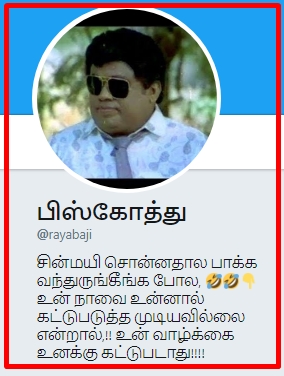 The user who realized that many would visit his bio after the reply of Chinmayi added a sentence about the same and also replied her comment :

Chinmayi is one of the main face of MeToo movement in South India as well who still believes that she could expose the predators in Cinema Industry. The singer shared enormous screenshots of the messages she received in her inbox which will either be an exposure of an abuser or a complaint from a woman victim of sexual harassment. She also never missed to give perfect reply to the abusers and trollers.

Chinmayi Sripaada is an Indian playback singer, working mainly for the South Indian film industry. She is also a voice actor, television presenter and radio jockey. She is the founder and CEO of a translation services company called Blue Elephant. She rose to fame for her critically acclaimed song “Oru Deivam Thantha Poovae” from the National Award winning movie Kannathil Muthamittal.

What do you think on this comment of the user and Chinmayi’s reply to this ?? Let us know your views !!