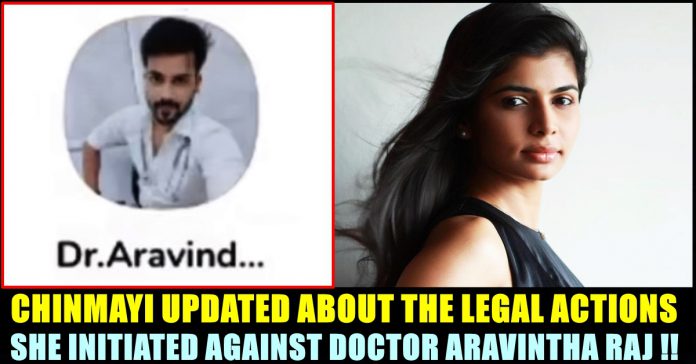 Chinmayi went on to express her displeasure over the individuals who shared her personal contact number to Doctor Aravintha Raj. It all started when Doctor Aravintha Raj made false claims about the personal medical details of Chinmayi in club house to the users of it. When Chinmayi directly interacted him questioning about the claims, Aravintha Raj who was in an intoxicated state at that time, couldn’t respond to her questions properly.

He said that he will hold responsible for all his actions and asked “Sorry”. He also said that he spoke to Chinmayi’s mother and apologized saying that he feels sorry for the inconvenience. “Yes… That was me. I wont blame Alcohol for what I did. I hold responsible for all my actions. Sorry♥️ Spoke with concerned person. (Chinmayi’s Amma since Chinmayi didn’t take calls) Sorry for the inconvenience.” his post read.

He also posted a number of other posts justifying himself. However, Chinmayi, on Monday came up with a series of tweets updating about the legal actions she took/going to take against the Doctor. “I have sent an email to the TN Medical Council along with Dr Aravindha Raj’s audio grabs that other users shared with me. I am learning what other legal recourse is available at this point.” she said in her first tweet and added “The person who shared my number or my mother’s number without even asking needs to be ashamed of themselves. Dr. Aravindha Raj is not entitled to speak to me. I didnt know him or of him, at all. Neither did my mother. He was a random stranger in CH.” in the next.

The person who shared my number or my mother’s number without even asking needs to be ashamed of themselves.

Dr. Aravindha Raj is not entitled to speak to me. I didnt know him or of him, at all. Neither did my mother. He was a random stranger in CH.

Meanwhile Aravindha Raj has deactivated his Facebook account through which he has been responding to the allegations of Chinmayi.

A 55-year-old man lodged a complaint at the Tondiarpet police station because he allegedly lost his slippers worth Rs 800 on Sunday. Police in Tamil...