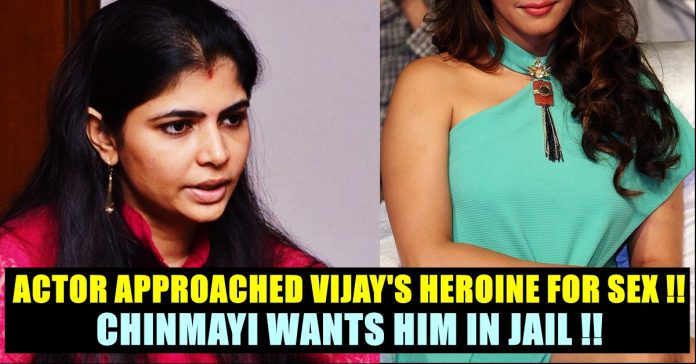 Chinmayi Supports Vijay’s Heroine Who Faced Casting Couch At The Age Of 15 !!

Isha Kopikkar is known among Tamil audience for pairing up with actor Vijay in the movie “Nenjinile” and for acting in few more Tamil films such as Narasimma, En Swasa Kaatre etc. Lately the actress joined the Bharatiya Janata Party in the presence of Union minister Nitin Gadkari. She has been appointed as the working president of the BJP’s women transport wing.

Now in a recent interaction, Ishaa has revealed about some of the darkest moments she faced in her life. Speaking to Pinkvilla, Ms Koppikar said she was asked by a producer to ‘get into the good books’ of a lead actor of a film. Isha Koppikar alleged that when she called the actor up he asked her to come alone, after which she told the producer that he ‘should cast her for her talent.’ Ms Koppikar also said that she lost the role and never worked with the actor.

Watch the interview of her below :

While recalling that particular incident, Isha said, “Yes, I have been propositioned. One producer told me, ‘This film is happening. Call up this actor, you need to be in the good books of actors. So I called him. He’s told me his full timetable. He’s an early morning person and he goes to the gym at this time. He asked me to meet him in between his dubbing and something he was doing. He asked me who I was coming with and I told him I will be coming with my driver. He said, ‘Don’t come with anybody’. I was not 15 or 16 then. I knew what was happening. So I told him, ‘I am not free tomorrow, I’ll let you know’.

She added, “I immediately called up the producer and told him that he should cast me for my talent. But then, I can’t be forced into doing all these things for a role. That is what is intimidating for a lot of people. When a woman says no, they can’t take it. And temporarily, you’re written off. I never ended up working with that actor.”

On seeing this news, popular feminist and representative of South India’s MeToo movement Chinmayi Sripaada demanded an arrest for the actor for being a pedophile. “If an actor asked a 15 year old to have sex with him, he is a child sexual offender. I wish Pocsco laws could come into force to throw the pedophile into jail.” read the tweet of Chinmayi.

If an actor asked a 15 year old to have sex with him, he is a child sexual offender. I wish Pocsco laws could come into force to throw the pedophile into jail. pic.twitter.com/FmpX35Cbxe

What do you think on this allegation of Ishaa ?? Comment your views !!

Previous articleAfter Vijay, Lokesh Kanagaraj To Direct This Epitome Of Kollywood !!
Next articleNorth Indian Cricketer Won The Hearts Of Tamil People By Tweeting In Tamil !!

A viral video that showed a man slapping his fellow phone cover seller for selling his products for less price went viral in social...