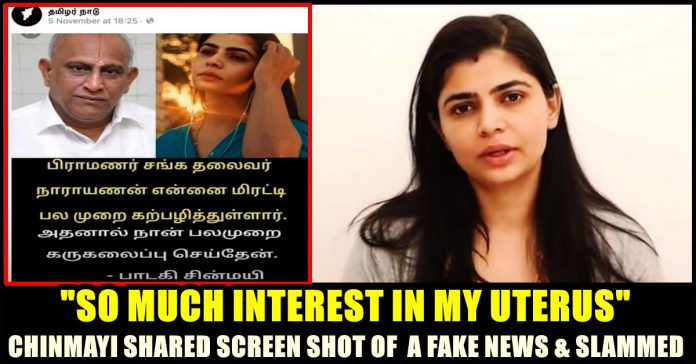 Chinmayi Slammed This Face book Page For Spreading Fake News About Her !!

Popular playback singer Chinmayi reacted to a fake news that was spread against her by a Face book page named “Tamizh Naadu”. The page, through a post, said that Narayanan, leader of the Tamil nadu Brahmins Association raped the singer multiple times and made her abort her child several times. Brushing off the baseless report, Chinmayi slammed the page saying that such “minions in Tamil nadu continue to do this”. She also wondered what with those men and her supposed abortions by questioning their stand about men who rape.

Being a most prolific singer, Chinmayi is known for raising voice against the sexual harassment that are taking place against women and never missed to expose men who involve in abusing women verbally, physically. After accusing lyricist Vairamuthu by alleging that she was asked to “cooperate” by him, Chinmayi became one of the most active personality in South Indian social media forum in helping women in calling out sexual predators. She has been sharing the anonymous messages that were sent to her on how men are involved in harassing women mentally and physically.

Ever since accusing the most influential lyricist, Chinmayi is also becoming a subject to online troll and criticism. However, Chinmayi didn’t stop calling out miscreants who involve in abuse/harass women through digital platforms or in person. On Tuesday, she came up a story questioning why men are so much obsessed with her supposed abortions. She also stated that those men are very much interested in her uterus and devoting the penis that rape.

“THE MINIONS IN TAMILNADU CONTINUE To DO THIS. THERE WAS AN UNCLE WHO COMMENTED ON THIS PAGE AS WELL. BASICALLY THIS POST SAYS I WAS RAPED MULTIPLE TIMES AND HAVE ABORTED MULTIPLE TIMES. I DONT KNOW WHATS WITH THESE MEN AND MY SUPPOSED ABORTIONS. SO MUCH INTEREST IN MY UTERUS BUT COMPLETE DEVOTION TO PENISES THAT RAPE” Chinmayi said through her post by adding the screen shot of the fake report.

“THIS PAGE APPARENTLY ASKS FOR A SEPARATE LAND FOR TAMILS AND THIS IS THE KINDA CONTENT THEY SHARE. NOTHING TO DO WITH WHAT THE PAGE STANDS FOR. HAS SOME 2000 FOLLOWERS WHO FOLLOW THE PAGE AND WONT QUESTION WHY SUCH STUFF IS SHARED” she added.

During 2018, when the Me Too movement was in full force, Chinmay tweeted allegations made by unidentified woman against Narayanan, president of TAMBRAS. The woman accused Narayanan of making sexually-laced remarks and gestures at her when she visited him seeking an advice on securing a job. Dismissing the allegations, Narayanan said that they were fabricated.

A group of members demanded him to step down from his post in order to allow for an inquiry to be conducted. However, Narayanan refused to hear the arguments, according to reports.

Shruthi Nakkhul replied to her Instagram followers who advised her on how to take care of her baby after sharing a picture of herself...