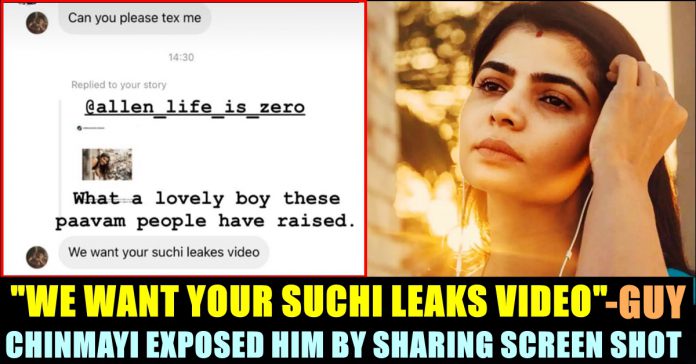 Singer and voice artist Chinmayi who is known for her raising voice against women harassment through “MeToo” movement, exposed an Instagram user who sent obscene texts to her in her inbox. Sharing the picture of the youth posing with their parents, Chinmayi said that his parents are pity and blamed the upbringing of their son.

After accusing lyricist Vairamuthu by alleging that she was asked to “cooperate” by him, Chinmayi became one of the most active personality in South Indian social media and helped women in calling out sexual predators. She has been sharing the anonymous messages that were sent to her on how men are involved in harassing women mentally and physically.

On Tuesday, the playback singer has came up with an Instagram story, exposing an online user who sent abusive text to her. Replying to one of her Instagram stories, a youth whose Instagram handle name reads as “Allen life is zero”, said that he wants the “Suchi leaks” video of the “Mayya Mayya” singer. Earlier, he attempted to get Chinmayi’s attention by sending texts such as “Hello mam”, “Can you please text me”.

Responding to his text, Chinmayi uploaded a screenshot of one of his pictures in which he could be seen posing with his parents and wrote “What a lovely boy this paavam people have raised” in her story. She also tagged his account while sharing the story to her seven and half lakh followers.

Here’s the screen shot of the story shared by Chinmayi :

Chinmayi is also being targeted by the supporters of BJP party for raising her voice against the arrest of climate activist Disha Ravi. Many of the supporters started supporting Vairamuthu to counter Chinmayi who wrote “I’m heartbroken. We ARE STILL are a democracy. Dissent is normal even if you don’t like it. In solidarity with the hero, Disha Ravi.” in suppport of the 21 year old.

We ARE STILL are a democracy.

Dissent is normal even if you don’t like it.

In solidarity with the hero, Disha Ravi. pic.twitter.com/t0gSwdivdt

“Although I am not new to abuse, I do need to clarify the following. Having a differing opinion on social media is always met with abuse. However many BJP followers, for the past few days, have suddenly become sympathisers to Mr Vairamuthu.” Chinmayi wrote by sharing the screen shots of the BJP supporters.

“Some of these tweets are in Tamil and they say “Vairamuthu chose the right woman to molest.” My wishing for peace in this country or my solidarity to Disha Ravi have NOTHING to do with Mr Vairamuthu, who’s named by 17 women so far openly. I have been banned by BJPs Radha Ravi.” she wrote in another tweet.

Some of these tweets are in Tamil and they say “Vairamuthu chose the right woman to molest.”

My wishing for peace in this country or my solidarity to Disha Ravi have NOTHING to do with Mr Vairamuthu, who’s named by 17 women so far openly. I have been banned by BJPs Radha Ravi. pic.twitter.com/tiOM4DNjXN

This comes as no surprise – a LOT of these tweeters were active supporters of the *rapists* during the Hathras case.
In case you didn’t know already – this is how depraved one section actually is. A mob supports this behaviour and actively encourages this. pic.twitter.com/qZluH6bC95

Disha Ravi is a 21 year old climate activist from Bengaluru. The Delhi Police have arrested her on the night of Saturday for allegedly editing a Google document shared by International climate activist Greta Thunberg on the protest of farmers. Delhi court has ordered to keep her in police custody for five long days and the arrest of the youth is being condemned by several academics, activists and artists.

Aishwarya Rajesh Reacted To The Horrific Crime Of Men Raping A Monitor Lizard!!

Followed by hundreds of people and a number of activists and  cinema celebrities, prominent Tamil actress Aishwarya Rajesh came up with an Instagram story,...

Fake reports on the death of influential personalities is not something new among the world of social media platforms and its users. A random...