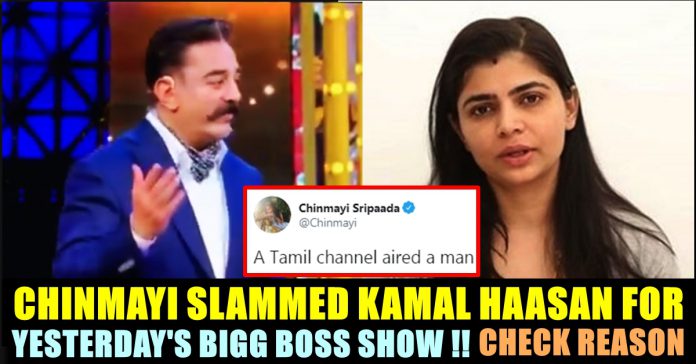 The Saturday’s episode of Bigg Boss Tamil has the ever charming Kamal Haasan in a cool attire. The 63 year old “Indian” actor, seems to be observed the show very keenly amidst his busy schedule. It is notable that his production venture “Kadaaram Kondaan” which has Vikram in the lead role got released lately. 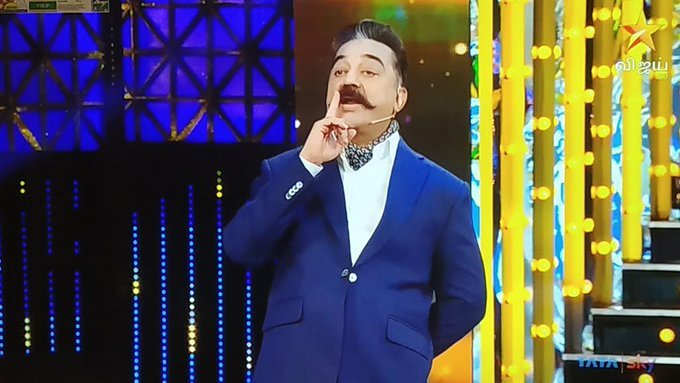 With his very own sarcasm and of course with responsibility, the actor ripped Meera Mithun apart for accusing person like Cheran. He started with Meera Mithun by asking her what really happened. When she said her story, Kamal to the audience said it is a mere “Icon Bashing”. Later he tried to explain to Meera about the causes of her accusation. Kamal also wondered on the fact of Meera continuing the accusation till yesterday without realizing the consequences she is going to face.

At one point, Kamal Haasan tried to explain the difficulties of Tamilnadu middle class women who are facing in government buses during peak hours, to make Meera realize that it is not a big deal. “There are also men who boards government bus only to touch women inappropriately” added Kamal Haasan. When he said this example, Saravanan, one of the Bigg Boss contestant raised his hand. “It seems Saravanan gave severe beating to a man who did it” said Kamal to the audience.

Saravanan denied it and said that he is the one who did it deliberately during his college days which made the audience in the hall to burst out in laughter. Kamal Haasan also took it in a lighter note and sarcastically trolled him by referring one of his popular phrase from “Kanmani Anbodu” song. She even condemned Kamal Haasan, host of the show, for making a joke of it. While addressing it, she said “Condemnation should have happened in the next second. Not made a joke of it. I am not gonna watch that show or the episode anyway.”

Condemnation should have happened in the next second. Not made a joke of it. I am not gonna watch that show or the episode anyway.

Na. Dont worry. Just make sure your daughters dont board the bus with him.

What do you think on her statement ?? Comment your views below !!