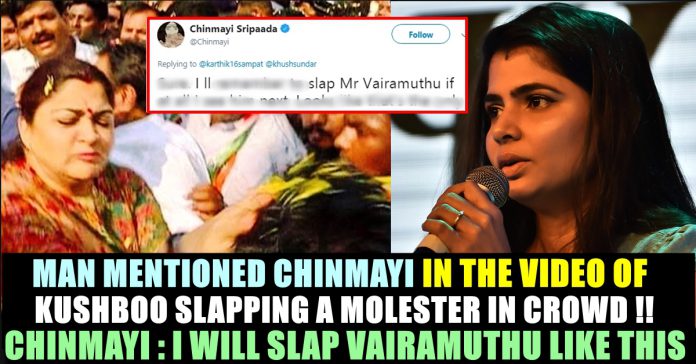 Congress leader Kushboo Sundar slapped a youth who allegedly misbehaved with her during a campaign on Wednesday in Bengaluru.

The incident happened when Kushboo was campaigning for the Bangalore Central Congress candidate Rizwan Arshad in the city. While Kushboo was making her way through a crowd towards the campaign vehicle, she suddenly turned around and slapped a man, who was immediately whisked away by the police. 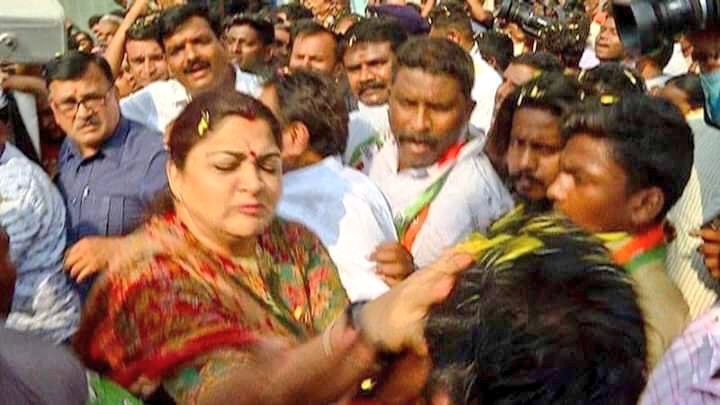 The video featuring Khushbu Sundar slapping the person goes viral in social media. Meanwhile actress Kushboo in her twitter account retweeting the posts of those who supported her act and question back those who questions her act.

In the video Kushboo is seen reacting instantly and Police pushed the man away who looked puzzled. However, through the posts shared by Kushboo in her social media account, it is clearly evident that the actress is accusing the man for misbehaving with her. Check out the video here :

On seeing this video one of a twitter user shared it and said that it is for Chinmayi who alleged that Vairamuthu misbehaved with her years ago. Check out his post here :

As he mentioned Chinmayi herself in his tweet, the singer immediately responded with a tweet reply. In her tweet Chinmayi said “Sure. I ll remember to slap Mr Vairamuthu if at all I see him next. Looks like that’s the only justice I’ll get. I have the age and the guts now.”

Sure. I ll remember to slap Mr Vairamuthu if at all I see him next. Looks like that’s the only justice I’ll get.

I have the age and the guts now.

Meanwhile Kushboo also replied to one of a twitter user who abused her personally. He sarcastically said “Oh She is getting anger ??” to which Kushboo answered as “If someone touches your mother’s hip , you will ask him to touch more ??”

She also replied another abuser for talking ill about her eprsonal character :

Un Amma paththini na naanum paththinidhaan da..we women are not your bloody property..behave well to be respected equally..I am sure you will say the same if someone misbehaves with the women in your family.. bloody faceless gutless losers.. https://t.co/lnOCOy6EhL

What do you think on these women’s statements ?? Comment your views below !!