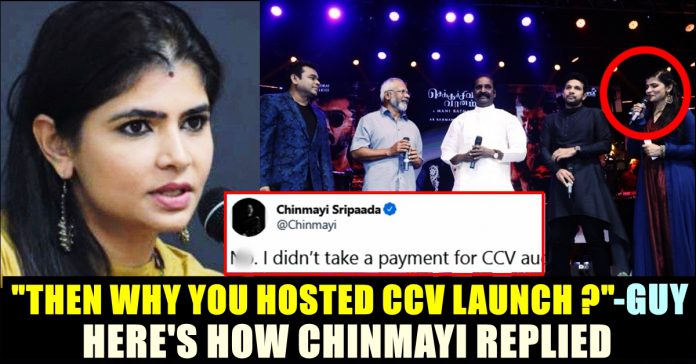 Chinmayi Revealed Why She Invited Vairamuthu In CCV Audio Launch !!

Poet and Lyricist Vairamuthu will be honoured with a degree of doctor of Literature at the SRM institute of Science and Management on this Saturday on December 28. Minister of Defence of India Rajnath Singh will be the Chief Guest for the event, and Dr. T.R. Paarivendhar, the Founder-Chancellor of SRM Institute and Member of Parliament, Lok Sabha, is the other personality presiding over the event.

This news surfaced when two unknown sources confirmed to First Post that Vairamuthu will not work for Ponniyin Selvan due to the harassment complaints made against him. However, The makers of the film are yet to announce it officially.

Popular singer Chinmayi Sripaada has accused Vairamuthu by alleging that she was asked to “cooperate” and visit him in a hotel. In the wake of #MeToo movement, there are plenty of other women who have accused Vairamuthu on the basis on anonymity. But singer Chinmayi chose to tweet. She has recalled an incident that a concert organiser asked her to “cooperate” and visit Vairamuthu in his hotel room. She said this happened in 2005 or 2006. Now through recent tweets, the singer said that Vairamuthu has molested her in the past.

As the news of him receiving the award from SRM institute surfaced, the singer has been expressing her opinion against through tweets. In a series of tweets, Chinmayi said that she avoided welcoming Vairamuthu in the Chekka Chivantha Vaanam audio launch.

“I have told multiple people over the years that he molested me and avoided him wherever I could including during the CCV audio launch. I made it CLEAR I will NOT invite him on stage, praise him or deal with him. But I had to do it anyway because my co-host refused.” she said in one of her tweet. Check out her tweet below :

3. I have told multiple people over the years that he molested me and avoided him wherever I could including during the CCV audio launch. I made it CLEAR I will NOT invite him on stage, praise him or deal with him. But I had to do it anyway because my co-host refused.

To this tweet, one of a follower questioned whether she welcomed Vairamuthu for money. “You are a good actor too. This is utter nonsense. I had to do it dialogue for what?? Money 💰” he said in his tweet :

You are a good actor too. This is utter nonsense. I had to do it dialogue for what?? Money 💰

To this question of the twitter user, Chinmayi said that she didn’t get payment for hosting CCV audio launch. The singer said that she did it out of respect for Mani ratnam and AR Rahman. Check out her reply here :

No. I didn’t take a payment for CCV audio. I did out of respect for Mr Mani Ratnam and AR. It also doesn’t mean they ll give me work because I did that. So please shut up. https://t.co/ybETEKw3mG

Comment your views on the reply by the singer !!

Electricity Minister Senthil Balaji Replied To A Citizen Who Is Facing Power Cut In Regular Manner!!

A tweet thread uploaded by a Twitter user about the struggles he has been facing due to regular power cut, grabbed the attention of...