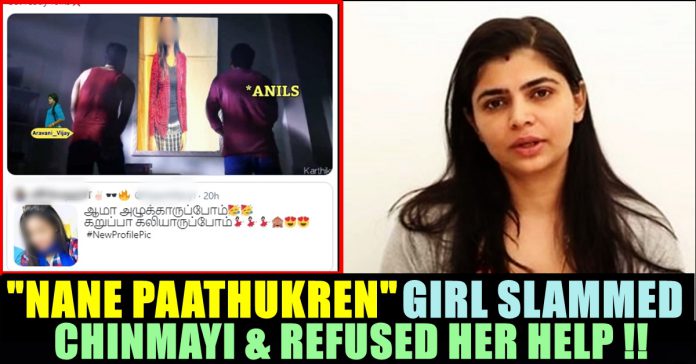 For updating her profile by uploading a picture, a twitter id named as “Trollywood” , made an obscene photo meme to troll her. On seeing this troll, one of a twitter user, mentioned singer Chinmayi to make her aware of this obscene troll.

Here’s the comment of the user which mentioned singer Chinmayi :

On seeing this comment, the girl who became the subject of troll, got irritated and said that needs no Chinmayi to defend her. In her tweet, the girl said that she can’t understand why Chinmayi is getting mentioned for every such issue. “I will take care of him (troller) myself. This is not a big deal and it is not the first time. I have no fear for anyone. Please leave this alone” read the tweet of the girl.

Followed by that she even added another tweet saying that she gets irritated on seeing Chinmayi getting mentioned everywhere. She asked the online user not to mention Chinmayi again.

Chinmayi who witnessed all these tweets, immediately replied by writing “I have no clue what you are all ranting about. Anyway ungaluku aal balam, troll balathukellm korachal illa. I am sure you can manage.”

I hve no clue what you are all ranting about. Anyway ungaluku aal balam, troll balathukellm korachal illa. I am sure you can manage.

What do you think on the way Chinmayi replied to the girl ?? Comment your views !!