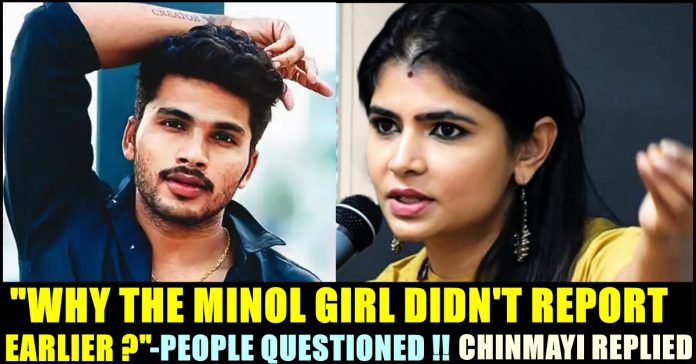 Chinmayi Replied To People Who Questioned On Why The Minor Girl Didn’t Complain Earlier !!

Chinmayi replied to people who questioned on why the minor girl who got sexually assaulted by popular tik toker “Fun bucket” Bhargav, didn’t complain earlier. She asked whether children are being taught sex education in our country and said that children couldn’t give consent. “It is never a survivor’s fault” said Chinmayi and reminded people how people blamed women in Kasi case in Tamil nadu.

A popular Tik tok star named fun bucket Bhargav got arrested by police under POCSO act for raping a minor girl in Vishakapatnam. The news came to light after the family members of the victim lodged a legal complaint with the Pendurthi police station on 16th of April. The family members came to know about the crime after they realized that the victim is four months pregnant. Reactions demanding severe punishment for the accused are surfacing in Internet with celebrities such as Chinmayi condemning the miscreant.

According to police officials, The popular tik toker had promised many offers to the minor girl after watching her Tik Tok videos. “He had proposed to the survivor and she had rejected him. But he blackmailed her saying he had her explicit videos. The survivor is also pregnant,”, Prem Kajal, assistant commissioner of Police had said.

She further said that the accused got produced in front of the Judicial magistrate and has now been sent for judicial remand till May 3. The Police has confiscated a while colour Nissan vehicle and a cell phone from the accused. Police have also advised public not to share the pictures of the survivor.

Fun bucket Bhargav rose to fame through his Tik Tok videos which had the lines “Oh My God !! Oh My God” in it. Ever since the news on this case got surfaced, Me Too activist Chinmayi has been condemning the accused. Now, she came up with an Instagram post and replied to people who are blaming the victim by asking why she didn’t complain earlier.

“I am honestly ashamed of the educated women and men in my DMs asking me an explanation as to why the girl didn’t report immediately after Bhargav misbehaved. “Why didn’t she tell till she was 4 months pregnant” is something a married woman is demanding. How many parents teach a 14 year old about pregnancy and sex in India? Which parent has had the chat about sex with their kids? How many parents in Telugu society have actually taken their teenagers to a Doctor / Counselor and given a sex education?! l asked the married lady if she ever had the sex ed chat with her parents – No response.” Chinmayi said in her post.

“A child can have a crush. Even think it is in love’. It is the DUTY of the adult to tell the kid NO and put her on the right path. The frontal cortex of the brain is not fully developed till one person is 25. Which is why a lot of teenage behaviours are rash. A CHILD CANNOT GIVE CONSENT! If the girl says she was ‘in love’ it is because she has no clue nor judgment nor maturity to understand what that is. And it is NOT HER FAULT!!” her post further said.

“All of society’s 100000 rules for women hasn’t prevented sexual assault. Time to change the rules. Shift blame where it belongs. IT IS NEVER A SURVIVOR’S FAULT!!” she said and added how people blamed victims in Kasi case. “Remember that society is USELESS. These 4 PEOPLE and their opinion in SOCIETY IS USELESS. You can make your own friends. Your own group of people who can all look out for each other. Disassociate from toxic, shitty, gossipy people and do yourself a favour. Manipulative, toxic people make you believe your life cannot go on without them. But it will. Try and feel the freedom. Your life will be AMAZING THE Day you stop caring rat’s ass for society and some useless relatives who only give you grief. You can make your own money, buy your own property and be happy with the people who keep you happy. And they needn’t be your relatives. Trust me on this.” the singer cum metoo activist said.

Previous articleKangana Ranaut Wanted Fine Or Jail For People Who Give Birth To Third Child !!
Next articleJyothika’s Comment On Giving Importance To Hospitals More Than Temples Receiving Accolades Now !!

Right from Rajinikanth to Ajith, the makers of Tamizh Padam 1 & 2 did not spare anyone. In onlt Tamil spoof film, there are...

Bigil released on the Diwali day of the year 2019 and became a blockbuster with 300 crores of box office collection, according to actor...