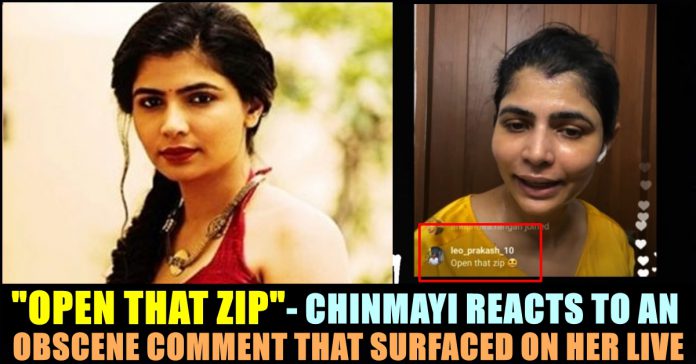 Apart from raising voice for women empowerment, Chinmayi also shares beauty/health care tips and actively breaking stereotypes that were imposed on women. She could be seen interacting with her followers through live sessions in the photo/video posting social media application. In one of her recent live sessions, she happened to face the obscene comment of “Leo Prakash”.

Capturing the screen shot of the comment, Chinmayi’s follower whose user name reads “Anu writes”, said that men who blames feminism are the same who publicly make such filthy comments. She wanted her followers to imagine what would introvert girls would go through if a celebrity like Chinmayi who raises voice for women rights faces the comment.

“And some men blame women for Feminism when clearly they re seen commenting publicly like this.
Comments like these are seen in a live of a famous person who talks about women rights and have the guts to point stuffs and violence against women. Imagine what would introverted girls/women feel when they receive such absurd texts/Comments. Shame on such men.” read the story of Anu. The “Mayya Mayya” singer endorsed her opinion by sharing it in her Instagram handle.

Here’s the screen shot of the story shared by Chinmayi :

It is hightime for men to realize that commenting such things in a woman’s post in social media would only make them famous, in a way that they don’t want to. They will also be subjected to legal punishment under the relevant sections of Indian Penal Code.

Previous articleBrahmin Priest Wants Others To Stay In House To Protest The Appointment Of Non-Brahmin Priests !! WATCH
Next articleVishal Tweets After LYCA Being Fined Rs. 5 Lakh !!

Hashtag "Release Perarivalan" is trending on twitter a day ahead of Home minister Amit Shah's Chennai visit on Saturday. Along with public, Tamil cinema...

"I am hurt, but what can I do ... we are poor people," said the Muslim delivery executive from food aggregator Zomato who is...