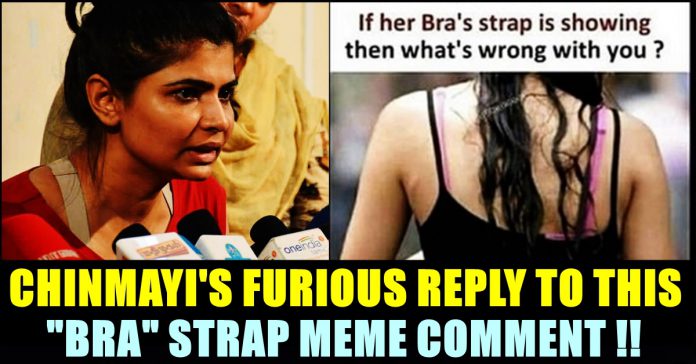 “Women needs to be precautionary or Men needs to behave ??” is the topic that the whole world is debating on. In India there are number of men who constantly asks women to dress properly to avoid getting raped. The number women who are raising voice against the statement are also increasing day by day. Now popular singer and Me Too activist Chinmayi has reacted on a guy’s comment who justifies his stand on making girls aware of bad men.

The guy who commented on a facebook page’s post says that making girls aware from stray dogs (Men) is all one can do. The post questioned the men why they are making it a big issue if a girl’s bra is exposed. “Don’t you know a girl wear a bar ??” the post asked.

To this post, one of a guy commented that all one can do is to warn girls to stay away from stray dogs. “We can’t question a stray dog why it is biting people. We can only teach you how to stay away from dogs. You will die by getting wounded from dog bite, if you can’t listen” the comment read.

To this post, Chinmayi Sripaada, one of the representative of MeToo movement trolled those who supported the comment. She blamed meme makers for influencing in her post as well. In her post she said “Nothing like a guy telling women that all men are ‘veri pidicha naai’ Meme makers aka influencers of the decade.”

Nothing like a guy telling women that all men are ‘veri pidicha naai’
Meme makers aka influencers of the decade. pic.twitter.com/6SJ72vy8jI

Followed by this, she posted another meme which made fun of a rape committed by 4 men to a man. Uploading the meme in her twitter timeline, Chinmayi wrote “Also – The news of a man getting gangraped by 4 other men is NOT a funny meme. No wonder men have NO agency or a safe space and cant seek help or share their trauma of sexual assault / harassment.”

Also – The news of a man getting gangraped by 4 other men is NOT a funny meme.

No wonder men have NO agency or a safe space and cant seek help or share their trauma of sexual assault / harassment. pic.twitter.com/SX1AZyeo0L

The number crimes against women in India is increasing day by day. The series of recent happenings of rape and murder shook the entire country and is making a very big impact in social media. Few people advising women to be safe whereas another set of people demanding men to behave well. Chinmayi is known for voicing out for the girls who became victim of sexual harassment. As soon as she represented the #MeToo movement in South India by accusing lyricist Vairamuthu, she started receiving so many personal messages from girls who got affected by harassers.

Comment your views on these posts shared by Chinmayi !!