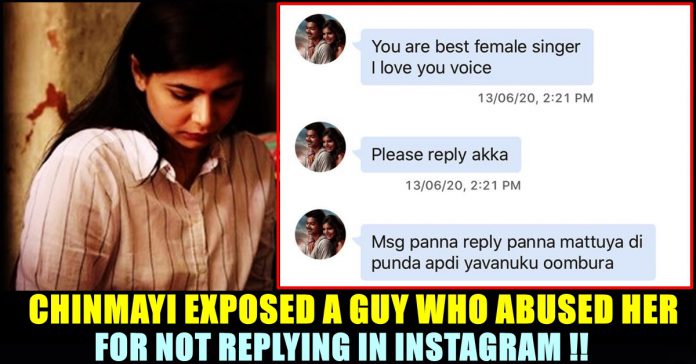 Chinmayi who has been constantly raising voice against women harassment, came up with a screenshot exposing a random Instagram using guy who sent abusive texts to her for not replying to him. The singer exposed his identity to her 10 lakh twitter followers. After exposing him, the singer involved in verbal spat with the twitter users who came in justifying the abuser’s act.

Chinmayi never spared her enemies in Social media platforms. Starting from Vairamuthu against whom she has been complaining about sexual harassment to a random guy who abuses her in Twitter, Chinmayi gave it back to almost every one of them instantly. Now she exposed a guy who is running a Instagram and Twitter account.

Now, in the screenshot shared by Chinmayi, the guy whose handle name reads as “Vijay Kutty”, says that Chinmayi is a best female singer and confesses that he loves her voice. In his next message he asks Chinmayi to reply by writing “Please reply Akka”. After three days, assuming that he will never get a reply from the singer, he started abusing her with bad words.

Sharing the screenshot, Chinmayi took a sly dig at people who are very much concerned about Tamil culture and advising women to dress properly by following the culture. She wrote “கலாசாரம்.” as her caption to her post.

“I replied to this brother. Good upbringing and family it seems :)” wrote Chinmayi by tagging the twitter account of the abuser.

Reacting to her post, one of a twitter user asked why she didn’t reply him in the first place. “Why you waited for him to abuse and posted the screenshot here ?? To gain publicity ? he asked to which Chinmayi replied by saying that she doesn’t need a publicity among abusers.

To a follower who blamed actor Vijay for this behaviour of his fan, Chinmayi said that he cannot be responsible for a guy who calls himself as a fan of him. She further stated that ardent fans of every actor would behave like this.

How Is he responsible for a psychopath that calls himself his fan? BTW – anyone who is a ‘blood’-fan across languages speak like this. You have no idea how telugu fanwars are and the language is. Same words different language

To singer Haricharan who said that this is a vomit, Chinmayi replied by writing “LOLZ. This is normal for these men :)”

LOLZ. This is normal for these men 🙂

The singer also said that most people avoid checking inbox due to this reason.

We all do actually. I guess most people dont check or engage with people on social media because of this. 🤷🏻‍♀️

Comment your views on the what the singer is going through !!

Pakistan Getting Brutally Trolled By Indians For Their Post Before Attack !! HILARIOUS !!

The nation woke up to the news that Indian Air Force has carried out a surgical attack on Pakistan as a retaliation to Pulwama...

"Cooku with Comali" sensation Sivaangi replied to a twitter user who asked her to clarify on the quotes she has been posting in her...