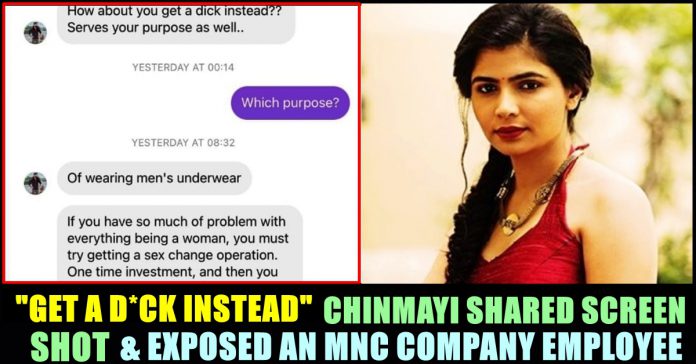 Now, she had shared the screen shot of the messages sent to her by a man in which we could see him abusing her as soon as waking up. He suggests the singer to change her gender if she feels having so much of problem with everything being a woman. He goes on to make lewd comments against her for being a “feminist”. He who wanted her to sing in traffic signal for a living, also compared her with people who beg in the streets.

“How about you get a d*ck instead ?” he replies to one of the stories of Chinmayi. When the singer replied back asking which purpose, he wrote “Of wearing men’s underwear. If you have so much of problem with everything being a woman, you must try getting a sex change operation. One time investment, and then you can go sing at traffic signals to recover your investment.”

“People like you (feminists) are not just anti men. You’re anti society. Anti social. You can never rise up. You’ll just perish. Because you thrive on these crap to survive and to make a name. People who beg on the streets lead a better life than c*nts like you. Disrespect!” he further wrote in his reply. Capturing the screen shot of the messages he sent, Chinmayi wrote “Life lessons from a man. DMs in the morning as soon as he wakes up”

Chinmayi exposed him through her twitter handle as well. “I have a humble request. I come from a place of wanting to make things better in general and for all of us to heal. I happened to be discussing Pink Tax on Twitter and Instagram and a lot of women spoke and shared stories. Men who are fathers of daughters chimed in too. We were all generally having a civil conversation. And then this happens.
He works at a major MNC. Mindsets need to change if we are looking at societal change and that can only happen with education. Please educate your employees.” she wrote in her tweet, sharing the screen shot of his messages.

We were all generally having a civil conversation. And then this happens.
He works at a major MNC.

Mindsets need to change if we are looking at societal change and that can only happen with education. Please educate your employees. 🙏 pic.twitter.com/LkEZg9IVnt

TV actress Anandhi who is known for debuting in popular Tamil serial "Kanaa Kaanum Kalangal", went on to act in a number of Tamil...

As we all know, Google Pay is used to send money to or receive it from others through our smart phone. Once the transaction...