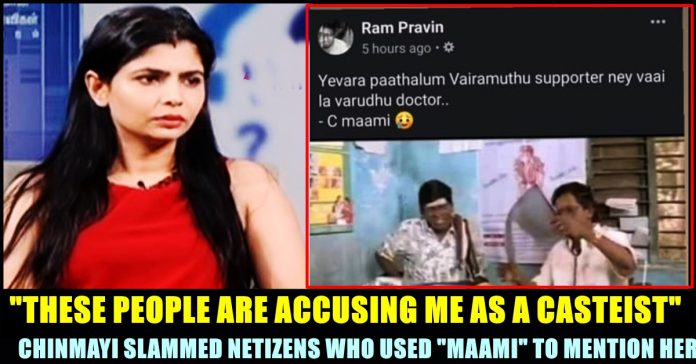 Being a most prolific singer, Chinmayi is known for raising voice against the sexual harassment that are taking place against women and never missed to expose men who involve in abusing women verbally, physically. After accusing lyricist Vairamuthu by alleging that she was asked to “cooperate” by him, Chinmayi became one of the most active personality in South Indian social media forum in helping women in calling out sexual predators. She has been sharing the anonymous messages that were sent to her on how men are involved in harassing women mentally and physically.

Ever since accusing the most influential lyricist, Chinmayi is also becoming a subject to online troll and criticism. On Friday, she shared the screen shot of a meme that trolled her for accusing lyricist Vairamuthu in a constant manner. The meme maker mentioned the singer as “Maami” which left Chinmayi to question his role in destroying caste system in the country.

“It seems they are working hard to destroy caste system and accusing me of maintaining “caste arrogance”. In the same line he used “Maami”. But these caste fanatics are claiming to destroy caste system” she said in her first story and went on to term them as “Maamas”. Chinmayi added the screen shot of the meme as well.

“If someone accuses anyone from their group, they will start branding the complainer as “casteist”, “Kaikooli” (the one who works for particular group). This is how a psychopath lied 10 years ago. His only job at that time is “Abusing”. Now, the psychopath got a powerful posting in a political party.” Chinmayi said and expressed her dejection over such people being supported by a group.

Through her next story, Chinmayi said “If you don’t like my opinion, criticize me. I have the habit of changing myself. I know the difference between people who truly criticize and who do not. I have seen so many cases. There will be no respect for me if you call me “Maami” and such. Don’t put a fake show saying that you are raising voice for social justice. All you do has no use”