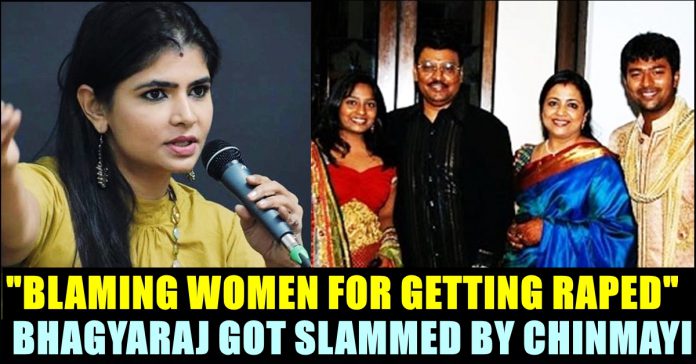 Chinmayi openly bashed at the veteran filmmaker Bhagyaraj for his speech on women about being safety. Followed by Radha Ravi and few more senior men from Tamil cinema industry, Director Bhagyaraj is facing severe hatred in social media platforms for his speech in a movie function. Bhagyaraj is known for the movies he acted and director. He has worked in more than 60 films and has directed more than 25 films. He won a Filmfare Best Actor Award for Mundhanai Mudichu.

In the function of “Karuthukkalai Pathivu Sei”, Bhagyaraj made a comment on the sensitive case of Pollachi rape. The Pollachi rape case involves gang members who used to befriend women on social media websites luring them to meet and then forcefully shooting their obscene videos. This incident created massive outrage in the state Tamilnadu where many started protesting in order to get the culprits what they deserve. Apart from the public who are very much angry on the rapists, many celebrities also raised their voice for the victims.

But in his speech, Bhagyaraj said that women has to be safe and precautionary more than boys to prevent the rapes which are taking place in the state. “After the arrival of cell phone, the discipline among women has reduced. Wherever we see, girls are always on their phone talking in husky voice.” said Bhagyaraj who proudly said that he wrote a scene in one of his movies on girls using multiple phones to have relationship with several men.

Chinmayi on seeing his speech, got extremely frustrated it seems. Being one of the active person who raises voice against female injustice slammed the filmmaker by saying “Somedays it is really exhausting to keep telling men in influence to not blame women for rape. Oosi nool / mullu selai done to death. And girls are actually dying because of this perpetuation. When the elders in an industry blame women for getting raped.”

Somedays it is really exhausting to keep telling men in influence to not blame women for rape.
Oosi nool / mullu selai done to death.
And girls are actually dying because of this perpetuation.
When the elders in an industry blame women for getting raped. https://t.co/WFKLxoY1pw

In his speech, the filmmaker reminded about a debate he participated in where he used the phrase “Oosi edam kudukkama nool nuzhayathu” (Without the cooperation of the needle, a thread can’t enter it) to point out that women too are the reasons behind the rapes.

“Even I said it in the debate in a humorous manner, that is the truth. It is because of the women, a crime takes place. So you (women) have to be careful. It won’t stop if you keep on accusing men” said Bhagyaraj only to get huge applause from the group of men in the hall.

“If a guy makes a mistake, it is not a big deal for him. But If a girl commits a mistake it is a big issue for her.” said Bhagyaraj who firmly said that the Pollachi rape crime occurred not only because of men. “After the advent of cellphones, women are not thinking about their safety. Men are not the only reason for the crime that took place in Pollachi. Women gave them the opportunity” said Bhagyaraj which created massive outrage in social media platforms.

As expected, Lockdown 3.0 got implemented by the government of India from Monday. The increase of positive corona cases in the country and to...

An interesting revelation made by Chennai based Indian spinner Ravinchandran Ashwin about Ravindra Jadeja's taste in the most popular sentimental Tamil song "Engal Veetil"...