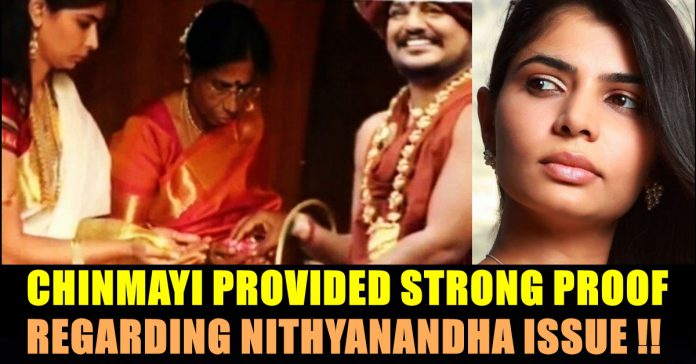 Amidst all the furores that is being created by the ashram founded by Nithyanandha, a picture of popular singer Chinmayi getting blessings from the self-proclaiming Godman went viral in social media. Now the singer herself has came up with a clarification to shut down the trollers.

While sharing these pictures Chinmayi wrote “I dont why these fans are doing this all over again after I have established that this photo is fake. Are they doing this for free or is this paid?”

I dont why these fans are doing this all over again after I have established that this photo is fake.

Are they doing this for free or is this paid? https://t.co/pHirTu6500 pic.twitter.com/j4GhpRCHGr

As soon as Chinmayi shared this post, the online user who abused Chinmayi by sharing the picture, deleted his tweet immediately. Chinmayi even stated her opinion on the victims of Nithyanandha. She asked where is the common sense of women who worshipped him. The singer further added that she believes in God but not Godmen.

There have been multiple women who have come out to expose this man who says he is a Swami / God, whatever, but where is the common sense? More people flock to him from all this publicity and nothing happens to him legally because he knows powerful people, I guess.

I believe in God, (more as a higher power and I am trying to elevate myself spiritually) and not in Godmen. I find them problematic. But what to say when people make Gods out of mere, problematic men. (Man/Men as in the default human)

BREAKING : A.R Murugadoss Accepted To Give “Thanks” Credit To Varun Rajendran ?? SHOCKING Verdict !!

AR Murugadoss’ Sarkar has set a new benchmark by crossing 13 million plus views in record time. The first teaser was released on Friday. Soon after,...