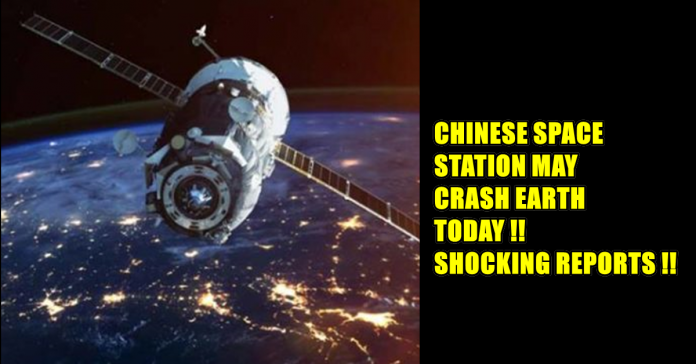 China’s Space Station Ting Tong May Crash Earth Sooner Than Expected : Are We In The End ?? : Shocking Updates !!

At some point this weekend, a dazzling fireball will tear across the sky as China’s out-of-control space station tumbles back to Earth at 16,500mph and burns up in the atmosphere.

The Tiangong-1, or “Heavenly Palace”, has been hopelessly adrift since the Chinese space agency lost control of the prototype space lab in 2016, five years after it launched as a bold symbol of the nation’s ambitions in orbit.

From the moment it was lost, scientists around the world began plugging information on the stricken craft into computer models to predict how its final act would play out. On Friday, the European Space Agency said that the unoccupied wreckage would crash back to Earth between Saturday night Sunday evening UK time.

“If you’re in the right place at the right time, and the sky is clear, it will be quite spectacular,” said Holger Krag, head of ESA’s space debris office in Darmstadt. “It will be visible to the naked eye, even in daylight, and look like a slow-moving shooting star that splits into a few more shooting stars. You might even see a smoke trail.”

As per space experts and researchers, it was expected to crash on Earth around 31st March or 1st April. A day +/- can happen too. The geographical location where it is likely to fall was unpredictable and is still the same.

The reason is that it was orbiting with a speed of around 27,000km/h so the location where it would fall can’t be predicted. Now as we reach 30th March and Tiangong-1 is just 1-2 days away from us, Fraunhofer Research Institute has managed to click the photos. Though Tiangong-1 has made people feel scared but everyone must note that it’s highly unlikely to reach the surface of earth. Researchers say that there are practically 0 chances that Tiangong-1 will reach the surface and they predict that it will crash while entering the atmosphere.

Only some part of spacecraft’s debris can reach Earth and but won’t cause any death as per the similar incidents in past.

With most of the Earth covered in water, and huge areas home to few if any people, the chances of being struck by space debris are remote. To date, the only person thought to have won this unenviable lottery is Lottie Williams from Tulsa, Oklahoma, who had a lump of Delta II rocket strike her shoulder in 1997 while on a stroll through a local park. “The risk is not zero, but history tells us that the risk is not that high,” Krag said. “Inside the zone, the risk of being hit is about the same as being hit by lightning twice in the same year.”

Previous articleStudent Locked Up And Thrashed By Police For Speaking To Them In English !! : WTF !!
Next articleSmith Doesn’t Know Anything About Ball Tampering : Is Smith the Scapegoat ??!! Shocking

Followed By Sivakarthikeyan, Suriya Also Accepted The Failure Of His Film ?? Check Out !!

Not many days ago, emerging actor Sivakarthikeyan accepted the failure of his recently released movie Mr.Local in the audio launch of his second production...