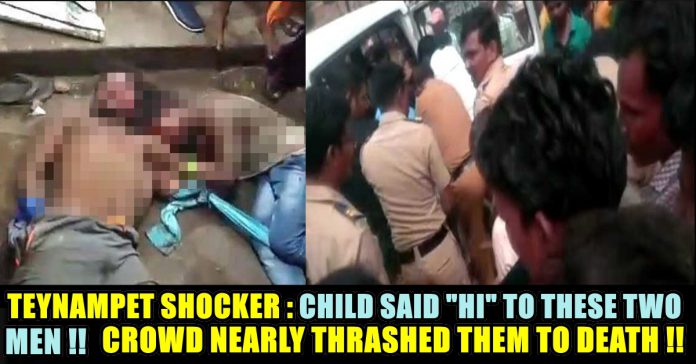 A day after the shocking assault on two young men from Bihar in the heart of Chennai, the city is reconciling to the fact that rumour mongering on WhatsApp and its human consequences have finally reached its shores.

Down the road from the Teynampet police station, at the bustling Hotel Ananda junction is where the incident took place. Even as the police station is busy investigating the man who started the mob attack on two construction workers of Chennai metro rail, the details are shocking. Recounting the events of Saturday, Teynampet Inspector Ramesh says, “The men were residing near the child’s house. They had moved out around 20 days back. The child knows them. They said hi and the child ran towards them. And then the mother came behind the child. The men gave the child to the mother and she took him away.”

As the mother was walking away, she was stopped by another resident of the locality, Murugan. Murugan asked the mother, Varalakshmi, about the interaction with the men. Assuming they were about to kidnap the child, Murugan went after the men who had walked 700 metres away, and started attacking them. Then more people joined in, the inspector said. With screams of a ‘child abductor on the loose’, the mob thrashed the two men, identified as Gopal Sahu, 22, and Vinod Vikhari, 25, who were later admitted to the Stanley Medical College Hospital. The police is also probing if Murugan, who has now been remanded in judicial custody, had a bitter past with the two men.

While the police is happy to have an active citizenry cooperating with it, violence, they say, cannot be condoned.

Instead of taking the law into their own hands, people should inform the police if they have any such suspicions, the inspector said.

Adding to this, Deputy Commissioner of Chennai Aravindhan said, “Because of the use of smartphones, information reach is faster, though it is not accurate. That’s one reason why we are conducting awareness campaigns regularly and telling them to trust mainstream channels. If they have any doubt, we ask them to contact the police. As a department, our request to the citizens is they should not take law in their own hands. Even if they find a suspect, they have to apprehend and hand them over to the police department.” Busting the myth that child abductors operate in this manner, Inspector Ramesh slams, “Kidnappers don’t act in front of the parents. This is not how kidnappings happen. These people are pedestrians. How can they be kidnappers?”

Pointing out that fear and panic on social media is in uncontrollably high proportions, the Inspector said, “WhatsApp, social media and TV channels try to raise awareness but the only message people seem to be taking from them is that they can attack anyone they suspect. Because this happened in the city, we were there within eight minutes. If it’s in the district, it would have taken more time. Had we gone there a few minutes late, they would have been beaten to death.”

Across the city, many police stations have taken to raising awareness in and around neighbourhoods where crimes generally take place.

“We have been conducting training camps and awareness programmes where we tell them not to get suddenly provoked. We give them counselling. We regularly brief them on what they can do as citizens and what they cannot. Suddenly if a child is missing, they think it has been kidnapped and the panic spreads. Things have calmed down over the past six months, but we’re trying to bring it down to zero.”

Previous articleBIGG BOSS 2 This Week’s Leader Leaked !! After Nithya, This Time Another Controversial Contestant To Lead !!
Next articleNayanthara To Team Up With This BIGG BOSS Mammoth In Her Next !! SHOCKING UPDATE !!

Simbu who was in Bangkok for all these days has made his come back to Chennai and the picture are getting circulated in Internet...