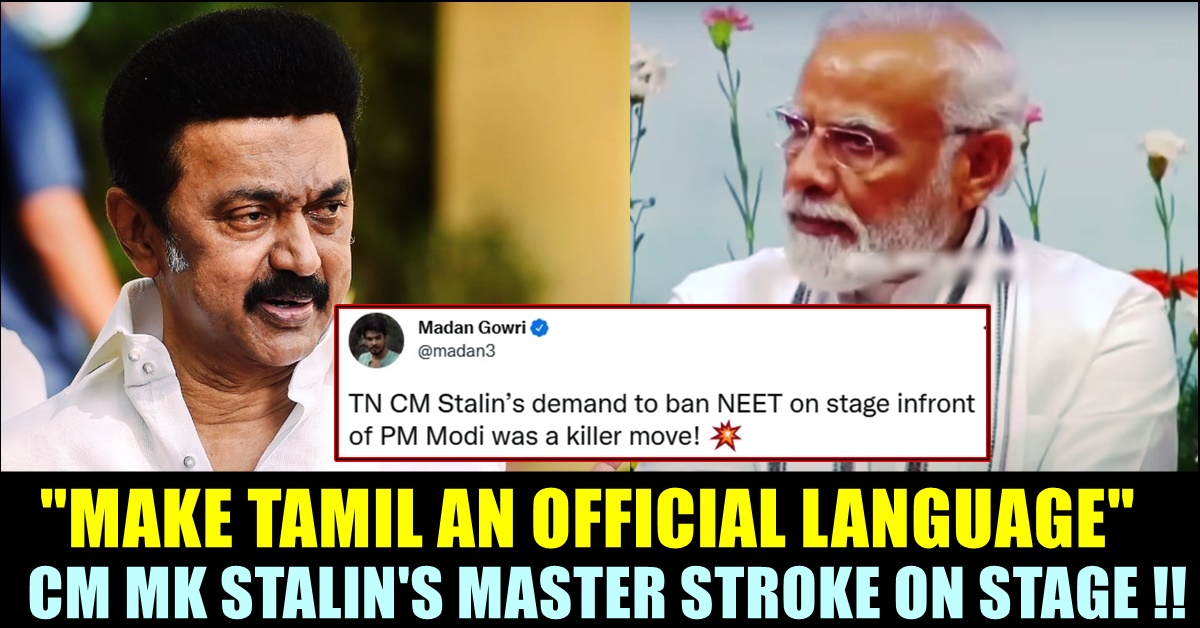 Tamil nadu chief minister MK Stalin used the opportunity of Prime Minister Narendra Modi’s arrival to raise four important demands of the state. It is the first ever public event attended by Prime minister Narendra Modi after DMK came to power in Tamil nadu and he attended the event in Jawaharlal Nehru Indoor Stadium, on Thursday, May 26. The Prime minister laid the foundation stone for 11 projects worth Rs. 31,500 crore.

While speaking at the event, Tamilnadu chief minister MK Stalin put forth four main demands to the Prime minister which included the retrieval of Katchatheevu island from Srilanka, Anti-NEET bill passing, clearance of GST dues and making Tamil an official language in Union government offices and the Madras High Court.

While addressing the event, MK Stalin pointed out “People of Tamil Nadu play a crucial role in India’s development. Our state is a pioneer not only in economy and other related factors but also in social justice, equality, women empowerment. In brief, Tamilnadu is a state for inclusive growth. This is what we call the Dravidian model”

I appeal to the Government to return the central GST dues of Rs 14,006 Crores to our state. I also appeal to the PM that Tamil should be announced as an offical language at the High court: Tamil Nadu CM MK Stalin in Chennai pic.twitter.com/ADovlAvHCm

“The Bill regarding exemption of NEET has been passed and sent to the President by the Governor. I appeal to the Prime minister on behalf of Tamil Nadu people, to give permission for this Bill. I hope he sees why these demands are important” MK Stalin said.

Further, Stalin added that he has listed out some of the important demands of Tamilnadu like “Katchatheevu, NEET Bill, GST dues, Tamil as official language in Union government offices and Madras High court. I appeal to you to consider them as early as possible”

Chief minister MK Stalin said that Tamilnadu was one of the most advanced state of the Indian Union and that “it will continue to serve as an engine for leading ans moving the country’s economy forward. Therefore, I want you to extend your fullest cooperation ans support to Tamil Nadu. I request you to allot more projects to Tamilnadu and more funds in the true spirit of cooperative Fedaralism” said MK Stalin and ended his speech with a famous quote of former chief minister M. Karunanithi “We will extend a hand of friendship and at the same time we will raise our voice for our rights”

The move of making the demands right in front of the Prime minister is being lauded by the online users who opined through tweets about the cool demands of the state’s Chief minister.