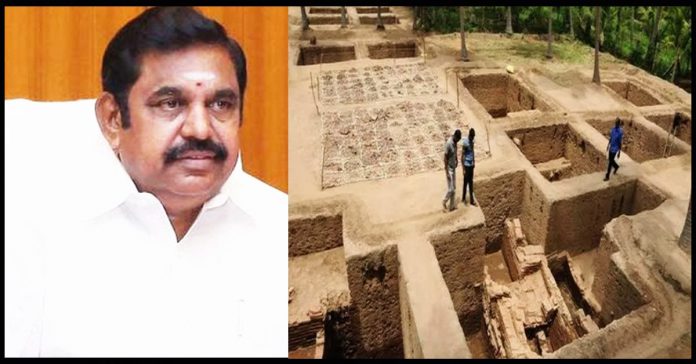 In Keezhadi of Sivaganga district, during year 2014, excavations began on behalf of the Centre Advisory Board of Archaeology. After the three phases of excavation work were carried out, 7818 items were found. Followed by this, excavations for the fourth, fifth and sixth phases were carried out on behalf of the Archaeological department of Tamil Nadu government. 5820 and 900 items were founds in the fourth and fifth phase of excavation.

In the sixth excavation, 40 Jar burials from Konthagai, 128 organic fossils were discovered from Konthagai, Keezhadi, Manalur, Agaram. In the same excavation, nearly 2600 artefacts were unearthed. Now, Chief Minister Edappadi K Pazhanisamy has inaugurated the seventh phase of excavations on behalf of the Archaeological Survey of Tamil Nadu through a video presentation from the head office in Chennai. Minister Ma. Pandiyarajan and Archaeological Department officials were present on the special occasion.

Check out the high lights of the “Keezhadi” discoveries :

The sixth phase of the excavation has helped authorities to find 1786 Archaeological objects totally. They have also discovered a rib of an animal which belongs to the cow family, Weighing stones, constructions, glittering pots in various colours.

More than seven human skeletons, skulls, chiseled knives, cert molecules with microscopically removed cut surfaces, and a smooth stone ax have been found in the excavation. A Gold coin weighing 300 mm, Organic paddies, Celadon type Chinese ceramic tile were found in the excavation. The sixth phase of excavation, identified three boreholes as well. The well which was located in Agaram, contains 25 plus layers.

“Arabic Kuthu” Fame Jonita Gandhi To Debut As Heroine In This Film !! Check Who Plays The Male Lead

Singer Jonita Gandhi who rose fame among the mainstream audience after appearing the lyric videos of Anirudh Ravichander's "Chellamma Chellamma" from "Doctor" and "Arabic...