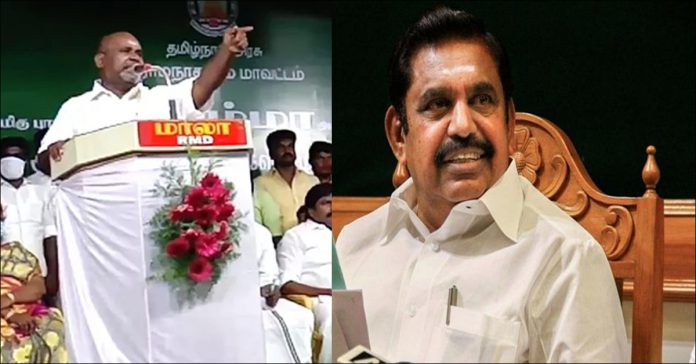 Minister R.B Udhayakumar has lauded Chief Minister Edappadi K Pazhaniswamy by saying that he is working at a lightening speed and referred a popular Vadivelu comedy scene from the movie “Maayi” which is familiar for the dialogue “Va Ma Minnal”, according to Puthiya Thalaimurai.

While speaking at the ceremony that conducted to provide government welfare assistance, Minister of Revenue, RB Udhayakumar said that Rs. 30 crore and 52 lakh of welfare assistance provided to the people of Ramanathapuram district for the first time in the history of Tamil nadu politics. “Late Chief minister Jayalalithaa’s dream of providing welfare to the nook and corner of this state has been fulfilled” Minister said at the ceremony which took place at Muthukulathoor of Ramanathapuram.

“Tamil nadu chief minister has been executing the schemes and helping people under rule 110. But the MLAs of DMK party boycotted the assembly. In a way of helping the farmers, Chief minister has waived the loan amount of Rs. 12, 110 crore for 16. 43 lakh farmers. Only because of Cheif minister Edappadi K pazhaniswamy, the government is acting in a lightening speed” Minister said during his speech.

Further, the minister said “Amit Shah, Minister of Home affairs, has appreciated state Tamil nadu for being the number one state in the country in water management. It is notable that Cheif minister Edappadi K Pazhaniswamy has initiated the “Kudimarathu” scheme which was invented 2,000 years ago.”

“During the COVID 19 outbreak, Chief minister Edappadi K Pazhaniswamy said that people’s welfare is more important for him than his own life and visited 38 districts and met people to solve their issues. However, leader of the opposition was releasing reports by staying in the fort.” Minister RP Udhayakumar added and criticized their method of receiving petition from people. “Don’t they believe their own party members ? Why are they locking the petition box while keeping it Arivalayam” he questioned.

“On behalf of the Tamil nadu government, Welfare assistance were provided for 5098 beneficiaries with an expenditure that worth Rs. 30 crore and 52 lakh through all the departments” Minister R.P Udhayakumar continued.

Previous articlePolice Got Suspended After He Received Kiss From A Girl As Bribe !! WATCH
Next articleTamizh Padam 2 Vs Drishyam 2 !! Filmmaker’s Tweet Goes Viral

Superstar Rajinikanth announced that he is not going to enter politics due to his health issues. The actor released a press note saying that...