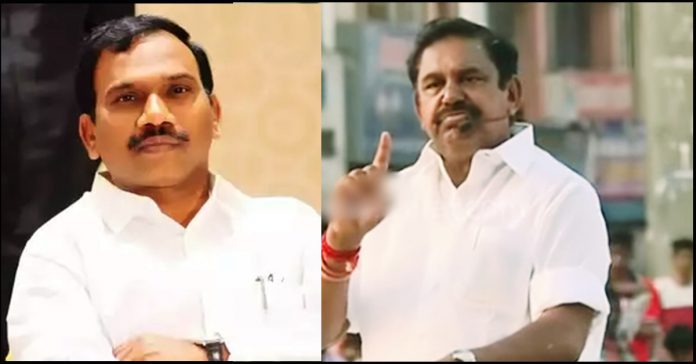 A video of chief minister Edappadi K Pazhaniswamy shedding tears in front of people is trending in the social media platforms. After the outrage created by the speech of DMK leader A. Raja, the video garnered huge attention among the public and political analysts. During his speech at Thiruvotriyur of Chennai, Chief minister Edappadi K Pazhaniswamy said that God will punish those who talk ill about motherr.

“I didn’t want to speak about it but after seeing the women in her, I couldn’t resist myself” said Chief minister Edappadi K Pazhaniswamy before giving a brief gap amidst the loud noise that erupted against A. Raja. I see that as a remark against every mother is the families. You people should see how low they stooped. You should see whet kind of speeches they are making when an ordinary man becomes a chief minister.” he said during his speech.

“If they are treating a chief minister in this way, who would assure safety for you common people ?? You should think of what would happen to all the women if they gets voted to the power. I am not speaking for myself. You people must punish them for the way they demeaned women and mothers. My mother was born in a village and worked hard throughout her life. She is no more. They are talking ill of her” he could be heard saying.

“Mothers are holding the highest status in our society. God will punish those who are talking ill about mothers and women” said Cheif minister Edappadi K Pazhaniswamy with a shivering voice. He who got emotional also shed tears in front of the public.

DMK’s #ARaja being a constant…..!!! pic.twitter.com/MhBksTpvp6

Members of various women organisations have lashed out at A.Raja for the way he made his public speech. “It once again proves that DMK is a party against women” said public, according to a report. Political analysts have alleged that the members of DMK are making such cheap comments due to the frustration of grabbing the governance. A tweet from the official twitter account of DMK leader Kanimozhi surfaced saying that no one will be spared if they make offensive comment about women.

On Monday, A. Raja made a public apology for hurting the sentiments of the Chief minister. “I was distressed to read in media reports that the Chief Minister had been hurt by my words. It was taken out of context, misunderstood but I express regret from the bottom of my heart. Further, I would say that if it is not for political reasons but even otherwise if he is feeling hurt, then I have no hesitancy to seek a heartfelt apology,” he said.

Sanjay Manjrekar Confidently Said That CSK Will Lose The Match Against Delhi !! Getting Brutally Trolled Now !!

Chennai Super Kings made it to their eighth IPL final as they beat Delhi Capitals by 6 wickets in the Qualifier 2 of the...