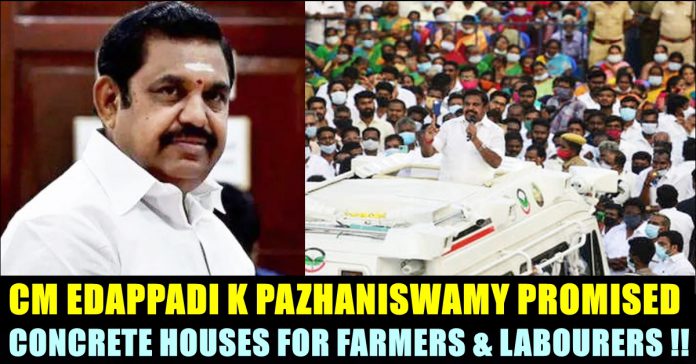 While addressing the party cadres at Chengalpet, chief minister Edappadi K Pazhaniswamy announced that the AIADMK government will build concrete houses for all homeless farmers and farming labourers if the party returns to power in the upcoming elections. Farmers and Labourers thanked chief minister Edappadi K Pazhaniswamy for making such announcement and it is notable that the chief minister who cares for the interests of the farmers, met them in person during flood and cyclone and immediately announced compensation for those who got affected.

Following former chief minister Jayalalitha’s “Vision 2023” scheme, the ADMK government led by Chief minister Edappadi K Pazhaniswamy is implementing the plans for social security and economical development in Tamil nadu. Chief minister Edappadi K Pazhaniswamy paid close attention to the development of Agricultural department and implemented “Kudimaramathu” scheme as a result of which the Tamil nadu government has procured about 32 lakh metric tonnes of paddy from farmers. From this, state Tamil nadu has achieved the feat of becoming the highest paddy purchasing state in the entire country.

Chief minister Edappadi K Pazhaniswami has also ordered to increase the relief fund to Rs.600 crores for the farmers who got affected by the Nivar and burevi cyclone. Now, while campaigning for his party in Chengalpet, the Chief minister has promised to build concrete houses for the farmers and farming labours. It has been reported that the latter welcomed this move of the chief minister.

The Chief minister who identifies himself as a farmer and always says that he knows about the hardship of them, is implementing several schemes for the development of the state’s agriculture, said the farmers and added that the department of agriculture in state Tamil nadu is headed towards a successful path. Farming labours also thanked the chief minister for his scheme of building concrete houses for them.

Pugazh who rose to fame through the widely watched "Cooku with Comali" show, invited to inaugurate a cell phone shop in Vannarapettai, Tirunelveli. After...