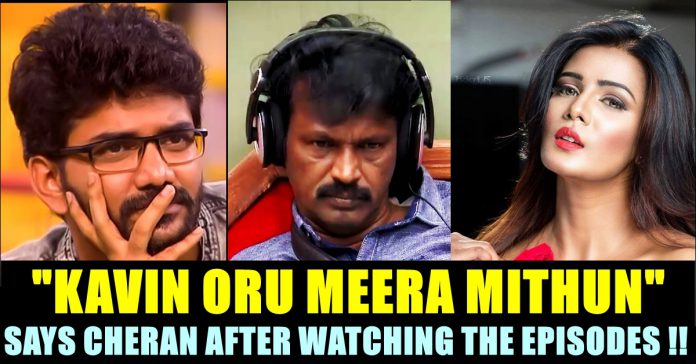 Cheran, renowned filmmaker of Tamil cinema who won national awards for 4 times, has participated in the recently ended Bigg Boss show. The show which was hosted by Ulaganayagan Kamal Haasan, was won by Mugen Rao, a Malaysian model and singer. Cheran got eliminated from the show on his 91st day due to lack of votes and he became the third contestant of Tamil Bigg Boss history to stay inside the secret room after elimination.

Now the director has gave an interview to Mirchi Senthil about his stint in Bigg Boss show. While sharing about every contestant of the show, Cheran said that Kavin didn’t like him from the very beginning. “I couldn’t judge him at all. Whatever ways you go against him, he would find new ways to defend himself. He would talk very much and will never care if people are understanding it. He would not try to understand our views as well. So I didn’t care for him much. He is also a “Meera Mithun” kind of guy and there is no compulsion in him accepting my views. He played his game” said Cheran in the interview.

Meera Mithun is known for her contradictory statements and accused Cheran once for physically harassing her. She refused to listen to others and was hated by almost every housemate during her Bigg Boss stint.

After entering the Bigg Boss house, the actor grabbed the attention of media for his strategy of loving 4 girls at the same time to win the title and to keep the audience engaged. Though it looked funny initially, things turned ugly when he gave his word to Sakshi, one of the four female contestants. He also had something going between him and Losliya while talking with Sakshi. This damaged his image in big time and the actor ended up owning 5 Lakhs offered by Bigg Boss and eliminated himself.

Expectation level on actor Ajith kumar's upcoming film "Thunivu" is increasing in daily manner. While the film's crew is yet to start their promotions,...

“Why All Patients Are Seated At Attention?” Popular Anchor Questioned After Watching Stalin’s COVID 19 Ward Visit