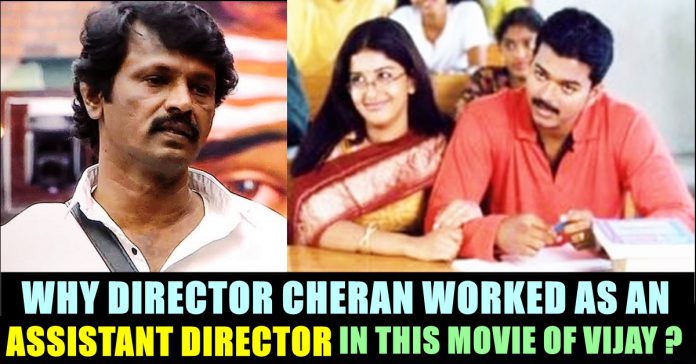 Director Cheran’s blockbuster film “Porkkaalam” telecasted in Sun Tv and a director named as K.P Jagan who worked as an assistant director in the film uploaded a poster of the film in Twitter and shared his memories. K.P Jagan who went to direct few notable films in his directorial career, remembered how he gave voice to crowd and sub characters during the post production of the film.

K.P Jagan also lauded his director and said that his hard work is impossible. He even remembered late Murali and Manorama at this time. Check out his twitter post here :

On seeing this post, Director Cheran who is very much active social media platforms, thanked him with a reply post.

One of a follower of Cheran, who has been reading these posts of Cheran and his assistant, posted an irrelevant reply asking the “autograph” filmmaker whether he is using his assistant directors without giving proper credits to them. “Parthiban said that you are a selfish. It seems he is right” he wrote in his reply.

K.P Jagan who directed films like “Pudhiya Geedhai, Kodambakkam, Raaman Thediya Seethai and En Aaloda Seruppa Kanom” came up with a reply saying that Cheran doesn’t need any assistant to create a story or to write dialogues. “We assistants are only as a part of the unit” he said his reply tweet, in a way of backing his master.

However, the follower who doesn’t convinced kept accusing Cheran for intervening in story department during the shooting of Jegan’s “Raman Thediya Seethai” in which Cheran played the role of a protagonist. Director Jagan denied his speculation. Here’s their conversation :

The follower Kabilan kept arguing and demanded Cheran to answer his accusation in his next tweet. He asked Jagan to swear on his child regarding Cheran’s intervene in “Raman Thediya seethai”

Cheran who read the whole conversation, answered to Kabilan by saying that his questions are irrelevant and contradictory. He asked Kabilan why he is dragging personal problems into this and said he don’t know how to respect him more.

To this tweet of Cheran, Kabilan said that he is a fan of the director and supported him during Bigg Boss show. He said that he just wanted to get a clarification on Parthiban’s interview to which Cheran replied by saying that he could have asked about it in inbox.

The conversation didn’t end there. Kabilan said that he talked in a right way only. He said that he didn’t intend to disrespect Cheran in social media.

While replying to this tweet, Cheran pointed out the first tweet of Kabilan and said that he worked as an assistant director for K.P Jagan in his debut film “Pudhiya Geethai” which had actor Vijay in the lead role. The filmmaker said that he couldn’t reveal such things to a third person like Kabilan to prove himself.

However, the argument ended only after director and actor Parthiban came in and asked Kabilan to concentrate on current issues in society. He said that the story of Bharathi Kannamma is the only reason for the argument to which Cheran replied with a “Thanks”. He said that these kind of issues are taking place only due to the immaturity of people like Kabilan.

Comment your views on this conversation between a fan and three filmmakers !!

Mukesh Singh and five others gang raped a 23 year old physiotherapist student in Delhi. The incident was happened on 16th of December...