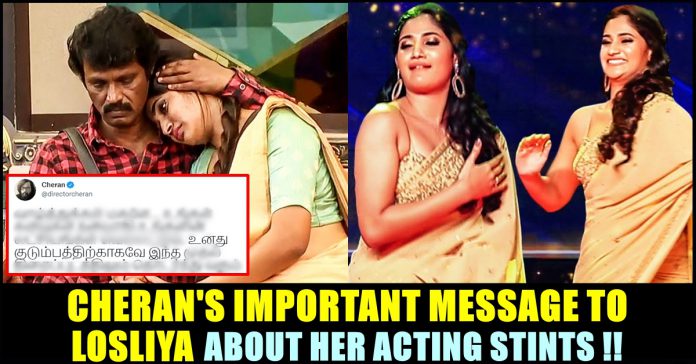 Unlike other female contestants of Bigg Boss reality game show, Losliya became pretty much busy by committing projects as female lead in some of the upcoming Kollywood films. Her debut film “Friendship” starring Arjun Sarjah, Harbhajan Singh and Sathish got released in theatres today and veteran Director Cheran who treated Losliya as his daughter during his stint in Bigg Boss season 3, came up with an important message. He wished her the best for “Friendship” film and hoped her to gain a good name by acting in many more films. The national award winning filmmaker said that he believes in her victory just for her family.

Losliya who became an overnight sensation through her Bigg Boss stint, is currently having a number of projects in her kitty. She took part in the third season of the Kamal Haasan hosting show in which Mugen rao grabbed the title. Sandy became the first runner up where as Losliya was pushed to the third place. Since the show, Losliya is actively conducting photo shoots and has been sharing the pictures of herself in her Instagram handle where she is enjoying 16 lakh followers as of now.

Prior Bigg Boss, Losliya was working as a news reader and impressed the viewers of Bigg Boss with her cute expressions and appealing looks. Her relationship with director Cheran had a separate fan base at that time. The budding actress said that Cheran looks exactly like her father and the duo started embracing each other ever since. Now, on the day of the release of her debut film “Friendship”, Cheran came up with a note, conveying his wishes to her.

Losliya, a Sri lanka based news reader, made her presence in the most expensive reality game show Bigg Boss. The show was hosted by “Ulaganayagan” Kamal Haasan. During a task, Losliya confessed that her father’s looks will be very much similar to Director Cheran who also participated in the show as a contestant. “Neighbours around would call my father as Cheran and whenever I see Cheran sir, he reminds me of my father” said Losliya in that episode. The budding actress recently lost her father.

On the work front, Losliya is going to be a part in a project produced by “Axess Film Factory”. In “Friendship”, Losliya is sharing screen space with Indian veteran cricketer Harbhajan Singh. The film is also going to have action king Arjun in a prominent role. In the “Axess Film Factory” project, Pooranesh who worked as executive producer with the production house is going to play the male lead, according to reports. In another project Losliya is going to pair with actor Aari who is known for appearing in “Maaya”, “Nedunjaalai” etc.

Previous articleSai Gayathri Replied To VJ Deepika After Replacing Her In Pandiyan Stores!!
Next article“We Have Completed The Shooting Of The Film”- Sathish Reacts To “Naai Sekar” Title Controversy

Celebrities Raised Voice Seeking Justice For The Demise Of Lavanya !!