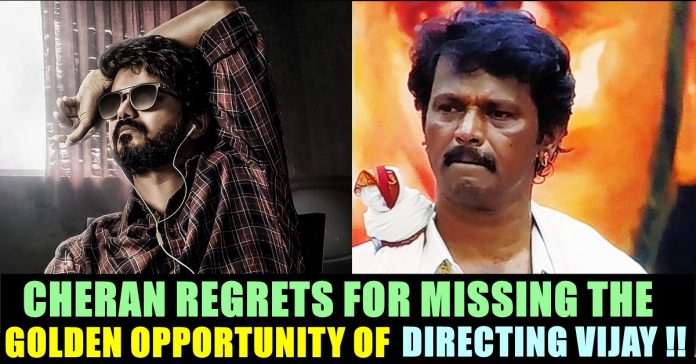 Cheran Regrets For Missing The Opportunity Of Directing Vijay !!

Filmmaker Cheran who won three national awards so far in his 23 year old filmmaking career, has expressed his regret on not working with actor Vijay in the past when there was a bright chance. The filmmaker who is also a seasoned actor, did it while replying to a twitter user who uploaded a video of actor Vijay appreciating Cheran’s blockbuster film “Autograph” in one of his earlier interaction with his female followers.

Talking about how much he liked the film, Vijay, in the interaction would say that what Cheran said in the climax of the film is 100 percent true. “While going back to the my home after watching the film, I counted how many autographs (crush or love interest) I have signed since my childhood” Vijay says with a wide laugh in his face.

“I liked the film very much. It is a different kind of filmmaking. I won’t expect four fights or songs while watching a film like “Autograph”. Vijay says who went on to reveal the crushes he had to his fans upon their request.

Cheran who got tagged by the Vijay fan, got emotional on seeing the video. “I won’t forget how Vijay appreciated me after watching the movie in Prarthana theatre. He even accepted to do a film with me. It is me who missed the opportunity as I was busy making “Thavamai Thavamirunthu” wrote Cheran as his reply.

This tweet from Cheran impressed the fans of actor Vijay who made the post reach widely. Cheran who surprised audience by participating in Bigg Boss show, shocked everyone by lasting in the game show for 91 long days. The last film he helmed was ‘Thirumanam’ which released earlier this year. During his Bigg Boss time, Cheran announced that he is going to work with Vijay Sethupathi in his next. Vijay, on the work front, is all set to appear in “Master” and is expected to work in the sequel of his blockbuster film Thuppaki as his 65th film.

Let us hope for Cheran and Vijay to join hands soon !!