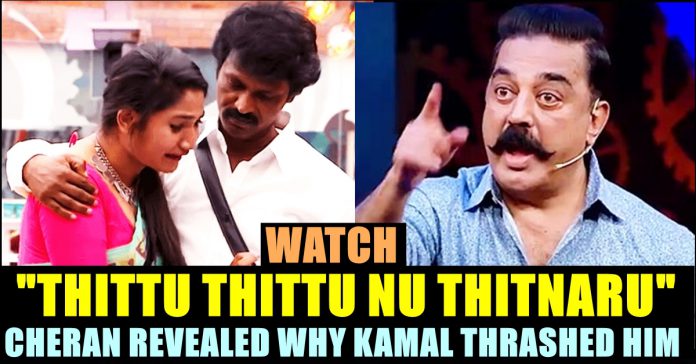 Cheran Opened On What Happened Between Himself & Kamal Haasan For The First Time !! WATCH

Director Cheran finally revealed why he walked out of Kamal Haasan’s “Mahanathi” in an interaction with ace filmmaker and actor Chithra Lakshmanan for his youtube channel Touring Talkies. Director Cheran who is known for making quality films in Tamil cinema, has won four national awards so far. His films such as Autograph, Thavamai Thavamirunthu impressed audience in big time. He recently made headlines for participating in the Kamal Haasan hosting Bigg Boss show. In the show we came to know that Kamal Haasan and Cheran worked together in a project.

During the show, in which Cheran lasted for 91 long days, Kamal Haasan has mentioned that Cheran walked out of the project in mid way due to opinion difference. The project they worked together in the film “Mahanathi”, a 1994 family drama. The film portrays the grief of a humble villager who sees his family and property being ruined. The film deals with several issues such as corruption and child trafficking.

In this interaction with Chithra Lakshmanan, Cheran has revealed the reason behind his decision to walk out from the project. Cheran said that he only regrets due to the decision he made. The actor/director who worked as an assistant director in the film revealed that he awes Kamal Haasan as a filmmaker and actor who has an eye for details.

Cheran said that Kamal Haasan is a creator who demands for the need of that time. “I removed myself from “Mahanathi” due to my ignorance. As a creator, he would wish to make a scene with perfection. We couldn’t understand it at that time due to inexperience. He would demand things with the go and it made suffer at times” said Cheran in the interaction who went to share about the main clash between himself and Kamal Haasan.

“On that day, shooting took place in Mount road. We all made our presence in the spot and the scene is between Kamal Haasan and Poornam Vishwanathan. Suddenly rain started pouring and Sun appeared simultaneously. This naturally created a rainbow in the sky which made Kamal Haasan to think about shooting the scene along with the rainbow.” said Cheran about the incident.

“He urged us to get the camera immediately to shoot the scene but the owner of the camera went to a car located far from the shooting spot to secure the camera from the rain. There were no vehicles to travel to get the camera as we removed all of them to clear the field. When we reached the guy with the camera he refused to take it camera out in rain. However we managed to bring the camera to the spot and unfortunately rain stopped” says Cheran with a wide laugh.

“Kamal sir started thrashing us due to the dejection. After seeing his scolding us we got angry. An associate director, out of frustration, left the spot in anger by throwing the things. Along with him, me and two other assistant directors left the spot immediately. I came to realize my ignorance only after my directorial debut in which I started scolding my assistants” Cheran revealed.

Further Cheran updated about his upcoming project with Vijay Sethupathi. He said that he is waiting for the dates of Vijay Sethupathi and is expecting it to happen during August or September. What do you think on this incident shared by Cheran ?? Comment your views below !!

Previous articleVijay’s Director Slams His Own Political Party !!
Next articleVivek Reacted To The Trending Template Of Himself !!

Oviyaa who gained Army pages for herself through her Bigg Boss stint, stunned her fans and followers through her recent quarantine photoshoot in which...

Kamal Haasan To Quit BIGG BOSS 2 Because Of This Serious Trouble !! : SHOCKING !!