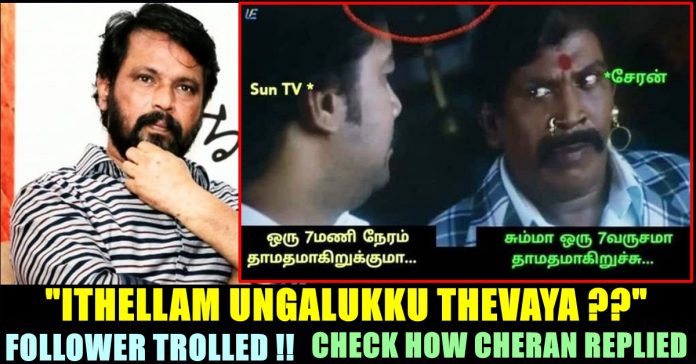 Director Cheran became a subject to trolls and memes after responding to a birthday wish made by the official social media handle of SUN TV seven years later. He shared the meme in his twitter timeline in a sportive way and replied to a twitter user who tried to criticize him.

Cheran, the three time national award winner for his filmmaking skills, surprisingly participated in the season three of Bigg Boss season and shocked everyone by lasting in the game show for 91 long days. The last film he helmed was ‘Thirumanam’ which released earlier in 2019. Cheran is also considered as one of the seasoned actors as his acting in “Autograph”, Thavamai Thavamirunthu” impressed a large number of family audience.

During his Bigg Boss stint, Cheran announced that he is going to work with Vijay Sethupathi in his next. The filmmaker is pretty much active in Twitter for past several months and his Twitter ID got verified as an official account by the Twitter management recently. Unlike other top-tier filmmakers, Cheran is very much interactive with his followers in the micro blogging social media sites.

Most recently, the filmmaker grabbed the attention of meme creators after responding to a birthday wish made my SUN TV’s official twitter handle in the year 2014. On 18th March of 2021, the filmmaker replied saying “Thank you so much, I happened to see it a bit late”

memes and trolls started emerging for the filmmaker and a meme creator applied the situation to a popular comedy scene in Vadivelu’s super hit film “Thalainagaram” where he would say that he forgot to brush for past six months.

On seeing this meme, Cheran, without losing his nerves, shared it in his official twitter handle and said “It seems I got trapped (by the meme creators), OK. Let’s enjoy” in a humorous manner by writing “ஆஹா… சிக்கிட்டமா… சரி.. என்ஞாய் பண்ணுவோம்…”

On the work front, Cheran who made “Thirumanam” in the year 2019 is awaiting for the call sheet of actor Vijay Sethupathi. The filmmaker’s “Autograph”, “Paandavar Bhoomi”, “Thavamai Thavamirunthu” were loved by the masses.

Ever since smashing a century against team England, Tail twitter is comparing Ravichandran Ashwin with "Vaathi", character played by actor Vijay in his recently...