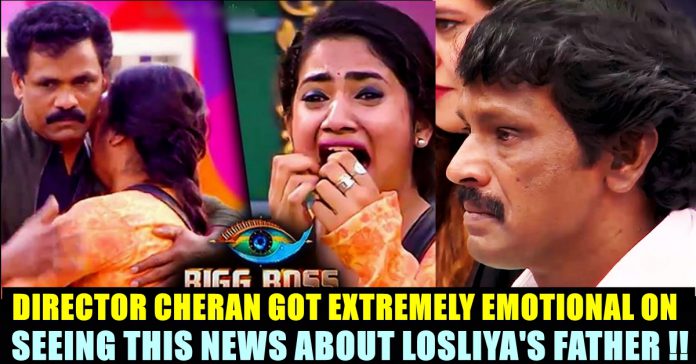 Several reports from various kind of media portals emerged saying that the father of former Bigg Boss contestant Losliya passed away. Named as Mariyanesan, he entered the Bigg Boss house during freeze task and grabbed the attention of Tamil nadu audience by questioning his daughter for her relationship with Kavin. Though the exact reason behind his death is unknown, fans are expressing their condolences to Losliya and her family. The aspiring actress removed a story she uploaded on Sunday morning in Instagram. Director Cheran who spent much time with Mariyanesan after he entered the house, posted an emotional tweet, expressing his condolences.

Losliya, a Sri lanka based news reader, made her presence in the most expensive reality game show Bigg Boss. The show was hosted by “Ulaganayagan” Kamal Haasan. During a task, Losliya confessed that her father’s looks will be very much similar to Director Cheran who also participated in the show as a contestant. “Neighbours around would call my father as Cheran and whenever I see Cheran sir, he reminds me of my father” said Losliya in that episode.

Now, after hearing about the news, Cheran posted an emotional tweet writing “Losliya . . I know how much love and affection you had on your father. This news literally shook me. I couldn’t imagine the pain you are going through, my daughter. I really don’t know how to console you and your family. Deepest condolences”

During the freeze task, Mariyanesan entered the Bigg Boss house with Yuvan Shankar Raja’s “Anandha Yazhai” song in the background which made Losliya to scream her heart out and cry. She ran and hugged him but the father looked very much dejected. “I didn’t send you here for money. I will even beg for a living. They (public) are saying that I sent you here for money.” he said to Losliya who was crying.

He even talked to Kavin and said that he is not angry with him at all and asked him to play game as a game. “Being a father of my daughter, I will maintain my standard. I felt really bad when people around me talking bad about my daughter. If they are talking like that to infront of me. How extreme they will go in my absence” he worried about the public. “Even people who know me very well asked me if I am going to attend my daughter’s marriage while I was coming here. Imagine how I would have felt.” he said.

Followers of the show sending messages to Losliya to console her through social media platforms. The aspiring actress deleted a story on Instagram which she posted regarding the celebration of Diwali on Sunday. A twitter user requested Vijay TV to make housemates pay tribute to Mariyanesan for 1 minute.