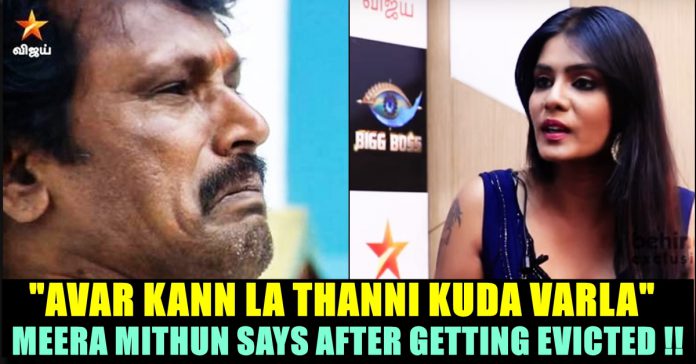 The first ever interview of Meera Mithun has released by several media houses. It is an undeniable fact that Meera Mithun occupied the most number of footages after the eviction of Vanitha Vijayakumar. Meera Mithun has appeared in few Tamil films such as 8 thottakkal, Thanaa Searntha Kootam etc.

Meera Mithun was evicted from BIGG BOSS on Sunday’s episode for receiving less number of votes. If you are not living under the rock, you must have crossed at least one post against Meera Mithun for accusing Director Cheran in Tamil Bigg Boss show. Viewers of the show are desperate to eliminate the model during the issue. Now after getting eliminated Meera Mithun has again said that Cheran did it deliberately in several interviews. “You have seen the video right ? Actually the video showed what I said. I am not so expressive, I will always be smiling, above all there was a play going, I didn’t want to interrupt it. “Cheran would always accuse me for not doing works inside the house but I am the most active worker in the house. When I caught him red handedly for harassing me, Cheran created a scene and portrayed a different scenario.”

“I complained about something but to escape he totally changed the scenario and staged a drama by gathering everyone. Kavin and Sandy has said at that time that there  were no tears in his eyes. He made a scene out of it is what I feel” said Meera in the interview.

For her hypocritical statements and blatant lies, Meera Mithun confronted with almost everyone inside the house. Starting from Cheran to Dharshan, Meera involved in verbal spats for no proper reason. She even questioned Losliya once for striking her picture in front of Kamal Haasan. She allegedly has fraudulent case against her for cheating a costume designer. It was also reported that police entered Bigg Boss house to question the model on Thursday.

What do you think on this interview of Meera Mithun ?? Comment your views below !!

Previous article“She Even Accused Her Professor During Her College Days”- Joe Michael’s Shocking Statements !!
Next articleFollowed By Ashwin, This Emerging Actor Got Angry On The Negative Hashtag Against Vijay !!

Vijay TV Removed The Particular Part From “Cooku With Comali” Show After Receiving Backlash From Fans ??

The most loved "Cooku with Comali" show came under scanner after a number of twitter users expressed their disappointment over a particular part which...