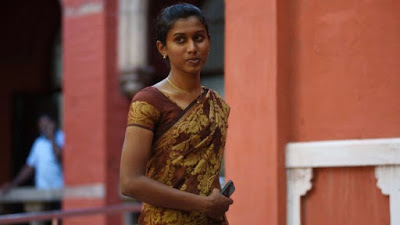 A 25-year-old K Prithika Yashini is all set to become India’s first transgender Sub Inspector of Police soon. In a landmark judgement, the Madras High court has cleared all the legal hurdles in her appointment. On Thursday the Court acknowledged that Yashini- a transder was eligible for the post. The Court directed Tamil Nadu Uniformed Services Recruitment Board (TNUSRB) to appoint Chennai girl Prithika, who was born and brought up as Pradeep Kumar on the post.

“We are, thus, of the view that she is entitled to be recruited to the post of sub-inspector and for declaration of her result with the hope that she would carry out the duties with dedication and commitment to advance the cause of other transgenders”, court said after hearing Yashini’s peition. The first bench, comprising Chief Justice Sanjay Kishan Kaul and Justice Pushpa Sathyanarayana also expressed anger over Board’s failure at providing a third gender category in its application form, despite a Supreme Court direction. “There was absence of any column for third gender, though this aspect now stands enunciated by the judgement of the apex court “which carves out the category of third gender for the purpose of safeguarding and enforcing properly their rights guaranteed under the constitution”, the Court said.
Prithika Yashini was born as a boy named Pradeep Kumar. She turned into Prithika after a sex change surgery. For Prithika, it was not an easy task to achieve this feat. Earlier her application was rejected by the TNUSRB under the ground that she didn’t come under given ‘two categories’. Felt heartbroken, she moved to Madras High Court. Reportedly, brave Yashini had citied a Supreme Court judgement, ordering Central and State governments to treat trans-gender as socially and educationally backward citizens and extend them all possible help. When asked how she was feeling, Prithika expressed satisfaction and happiness over her ardous journey. She was quoted as saying, “I’m excited. It’s a new beginning for the entire transgender community”.
Courtesy : OneIndia News
Previous article10 Places Around The World Where Prostitution Is Legal
Next articleNot all Super Heroes wear a cape! Meet Chennai SuperCop!

Parvathy Replied To Haters Who Criticized For The Way She Interviewed Maari Selvaraj !!

Ahead of Karnan's theatrical release, Director Maari Selvaraj is busy participating in providing interviews to the prominent Tamil youtube channels. On seeing the way...